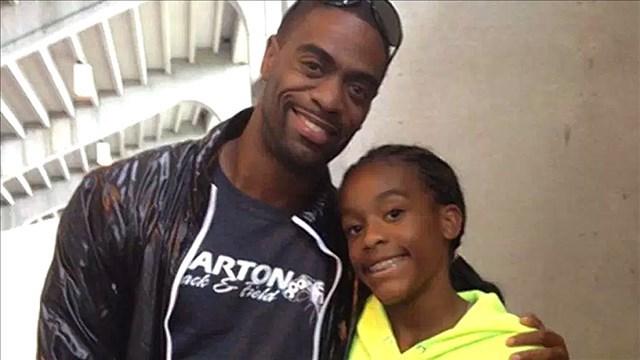 (CNN) -- Police arrested two more men -- a father and son -- in the shooting death of Olympic track star Tyson Gay's daughter, Trinity, who authorities say was hit by a stray bullet during a shootout in Lexington, Kentucky.

Police also have recovered a blue Ford that matches witness descriptions of one of the cars that fled the scene following the shootout, according to a Lexington Police Department news release.

Authorities later charged 21-year-old Dvonta Middlebrooks with wanton endangerment and possession of a firearm by a convicted felon, police said. The other man was not charged.

Investigators believe Middlebrooks fired multiple shots in the parking lot of the Cook Out restaurant where Trinity was hit in the neck, according to the news release.

The shooting erupted around 4 a.m. Sunday when men in two cars opened fire on each other in the restaurant parking lot before fleeing the scene, police said. Trinity was not a passenger in either vehicle, they said.

Trinity was taken to University of Kentucky Hospital in a private vehicle, where she later died, police said. The Fayette County coroner confirmed she was the track star's daughter. Her autopsy is scheduled for Monday.

Gay told CNN affiliate WLEX that he had few details about his daughter's death.

"She didn't make it. I'm so confused," the former world 100- and 200-meter champ told the station. "She was just here last week for fall break. It's so crazy. I have no idea what happened."

Trinity was a rising track star herself, a sprinter for Lafayette High School in Lexington, according to CNN affiliate WKYT.

During a 2012 interview with CNN's "Aiming for Gold," Gay spoke of balancing his own career with his desire to nurture Trinity's aspirations.

"I'm at a point where I want to be involved in more of her sports," he said. "It was pretty amazing to watch her run and compete and still keep her spirits up high when she didn't win."

'Our hearts are broken'

Condolences poured in from friends and associates of both father and daughter.

"Please join us in keeping the Gay family close in thought and prayer and supporting the students, staff and families at Lafayette High during this unspeakably difficult time," Fayette County Schools Superintendent Manny Caulk said in a statement.

The school system has activated a crisis team, which will be at Lafayette High School on Monday to offer counseling and support to students and staff.

Local schools and track teams, too, expressed their grief.

Athletes and Olympians also offered condolences on social media. Jamaican sprinter Asafa Powell wrote, "Bro want to send my condolences... can't even imagine what you must be going thru."

Fellow U.S. Olympian Lolo Jones wrote, "Heavy heart today for Tyson Gay and his family. Lord please ease their pain and give them strength during this time."

Tyson Gay flew from his home in Orlando, Florida, to Lexington on Sunday.