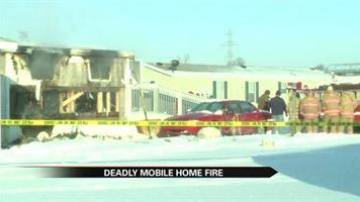 BRISTOL, Ind. --- Two people died in a house fire Monday morning. Multiple crews were called out just after 7 a.m. to 526 North Arbutus near the Timberbrook Mobile Home Park in Bristol.

The Elkhart County Sheriff's Department said 42-year-old Chad Russell and 67-year-old Crissinda Kabay were found deceased near the entrance of the home.

Nearby residents were evacuated for about a half hour.

Steve Tice was walking his dog when he heard the sirens. He watched as emergency crews tried to save his neighbors.

Tice says Russell had recently moved in to take care of an older relative.

"I was kind of sad to hear about that, but it is tragic though," said Tice.

Officers on scene said it didn't appear to be your typical fire.

"The fire is currently under investigation by our sheriff's department detectives, state fire marshals and Bristol," said Lieutenant Casey Lehman of the Elkhart County Sheriff's Department.

They don't believe the fire is suspicious, but it's too early in the investigation to know for certain.