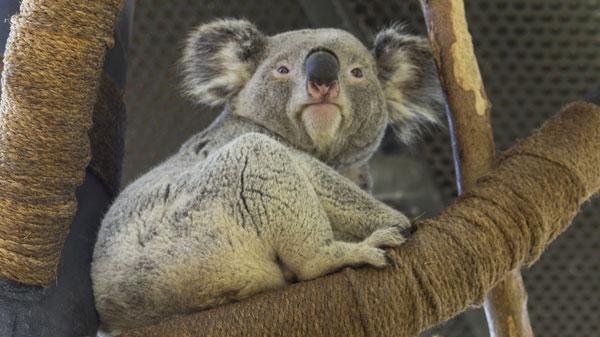 Passengers and crew aboard a Southwest Airlines flight Monday night got free tickets to the Indianapolis Zoo, koala masks and koala cookies because of two passengers on their flight – koalas Milo and Thackory.

Milo and Thackory will be part of an exhibit at the Indianapolis Zoo on May 23.

The zoo had visiting koalas in 2008 and they were a huge hit, zoo officials said.

Milo, one of the visiting koalas, is the son of Coombah, one of the koalas that visited in 2008.

More about MILO
Means: “Eye” in Aboriginal
Birthdate: July 2, 2011 (4 years old)
Milo is the son of Coombah (who was part of the 2008 exhibit at the Indianapolis Zoo) and Cooladdi. He is a very energetic koala, and is frequently seen jumping from perch to perch. He was named Milo (“Eye”) because his eye was the first thing keepers saw peeking through his mom's pouch before he fully emerged.

More about THACKORY
Means: “Heavy” in Aboriginal
Birthdate: June 15, 2011 (4 years old)
He is easy to identify because he has a pink spot on his nose. He's a laid back koala who loves to greet his keepers at the door in the morning while he waits for his breakfast. Thackory's parents were Muuri and Nariah, also two laid back koalas. He was named Thackory (“heavy”) because he was the larger of the two.