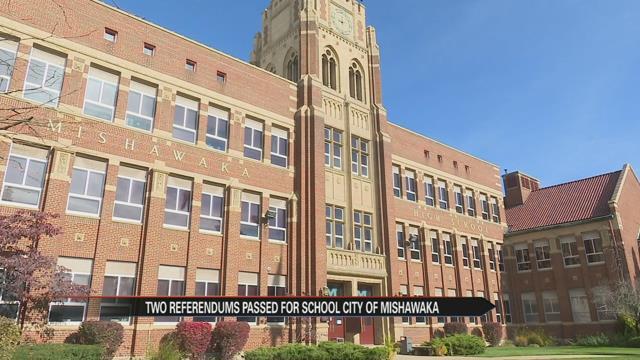 Danika Needham has four kids, all in the Mishawaka district.

“We need to get the funding back into the schools,” Needham said.

Majority of voters felt the same way, passing the referendums by a 72% margin.

“I’m exceedingly appreciative of the support the Mishawaka community has given to their schools,” Superintendent Dean Speicher said.

It will go to fixing infrastructure and safety issues.

The other referendum should generate $1.8 million per year for 7 years, and taxpayers will pay $0.34  more for each $100 on property tax.

It will go straight to the students and teachers, funding new technology and equipment for learning and teaching.

“It means that they’re going to have up to date, the latest and the greatest technology, hardware and software” Speicher said.

Speicher says he owes the ‘yes’ votes to good old fashioned community outreach, something he promises to continue now that the improvement process is a go.

“The community engagement process will continue into the future,” Speicher said.

This way, parents like Needham, can have some input on how the money’s used on their kids’ future.