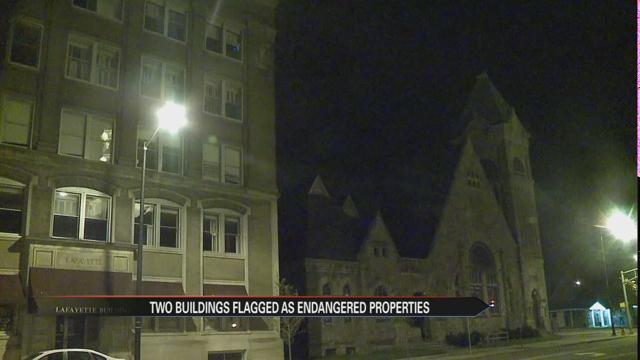 Two of South Bend's oldest buildings have been red flagged by the Indiana Landmarks preservation group.

The preservation group says the Lafayette Building and Old First Presbyterian church on Lafayette Boulevard are two of the 10 most endangered properties in the entire state.

Both buildings are right next to each other and are across from the Saint Joseph County courthouse. They've been around for more than 100 years and are currently vacant.

Indiana Landmarks is raising concern because, among other things, they cite $1 million in back taxes owed by the owners of the Lafayette building.

Indiana Landmarks believes the fate of the old First Presbyterian Church next door is directly linked to it. The city ordered both structures sealed last summer until code violations are fixed, like poor roofing and structural issues.

The report acknowledges that those fixes have been underway this year. But the current state of the two vacant properties has prompted the state preservation group to sound the alarm.

Roofing is the primary concern addressed for the old first Presbyterian church.

The five story Lafayette building is cited for deterioration of the interior and exterior.

Every year, Indiana Landmarks releases a report of the 10 most endangered properties. And this is the first year both have made it on to that.

The groups list bears no legal weight. It's more of a warning and recommendation for action to be taken rather than an order.