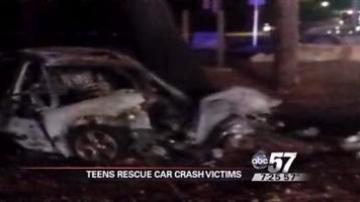 FLORIDA-- Spring Break is typically a vacation from the chaos of daily life, but for two teens it turned into an unforgettable story of heroism.

While on break in Florida, two teens heard a car crash, so they raced toward the car which was wrapped around a tree.

As one called 911, the other approached the car and saw that two people were trapped inside.

The car then caught fire, putting the teens in danger also.

The teen who was talking to police had to put the phone down and help get the passengers out of the flaming car.

One of the teens said, "If i watched two people burn to death i would be haunted by that
the rest of my life and there was no way i could let myself physically walk away from that."

The couple inside the car is still recovering in the hospital, but they are alive thanks to the two spring breakers now being hailed as heroes.