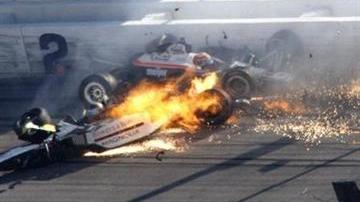 LAS VEGAS, Nev. -- Indianapolis 500 winner Dan Wheldon died Sunday at Las Vegas Motor Speedway after his car became ensnarled in a fiery 15-car pileup, flew over another vehicle and landed in a catch fence just outside turn 2. The 33-year-old racer was a two-time Indy winner, including this year's race.

Three other drivers, including championship contender Will Power, were hurt in the pileup during Lap 13.

Weldon was airlifted from the track to University Medical Center; about two hours later, his colleagues were told of his death.

"IndyCar is very sad to announce that Dan Wheldon has passed away from unsurvivable injuries," IndyCar CEO Randy Bernard said. "Our thoughts and prayers are with his family today. IndyCar, its drivers and owners, have decided to end the race."

In his honor, drivers took part in a five-lap salute around the oval.

IndyCar has not had a fatality since Paul Dana was killed at Homestead in 2006, during a crash in a morning warmup.

Sunday's wreck left Townsend Bell upside down while smoldering cars and debris littered the track nearly halfway up the straightaway of the 1.5-mile oval.

Some of those cars slowed, others didn't, and others spun in front of Wheldon and Power.  Spectators say there was so much chaos on the track, it was hard to tell who was driving what car.

Power appeared to fly over Alex Lloyd's car, rolling into the catchfence and landing on its right side. His in-car camera showed one of the front tires coming toward him in the cockpit.

Wheldon then appeared to drive over Paul Tracy's car. Tracy seemed to be slowing but Weldon did not. He went airborne and spun into the fence.

The track was red-flagged following the accidents while crews worked on fences and removed smashed cars.

Wheldon started in the back of the pack but quickly worked his way through the 34-car field before the wreck.