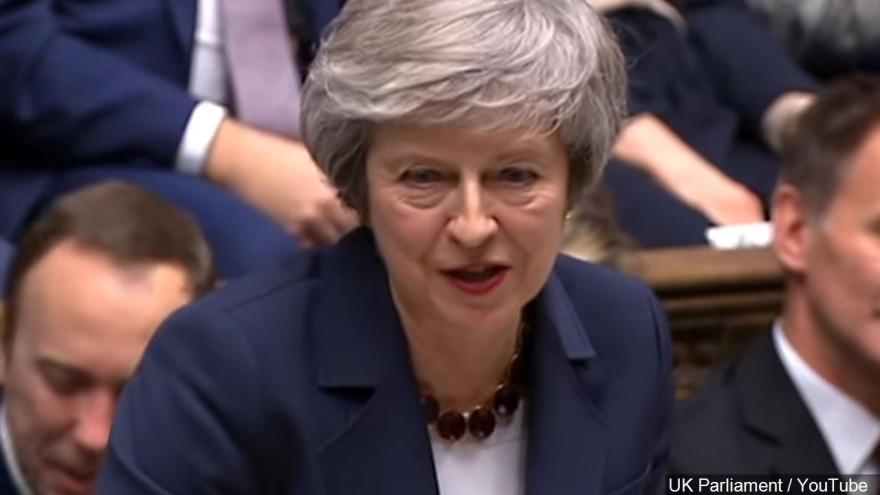 LONDON (AP) — British Prime Minister Theresa May conceded Monday that her twice-rejected Brexit divorce deal would be defeated by Parliament again if she put it to a new vote, though she said she still hopes to change lawmakers' minds and get the agreement approved.

May also acknowledged that she may be about to lose control of the Brexit process to lawmakers who want to force the government to change direction.

"It is with great regret that I have had to conclude that as things stand, there is still not sufficient support in the House to bring back the deal for a third meaningful vote," May told lawmakers in the House of Commons.

She said she will "continue to have discussions with colleagues across this House to build support" and hoped to hold the vote later this week.

Meanwhile, pro-EU lawmakers plan to try to seize control of the process by holding a series of votes on alternatives to May's deal.

They hope these "indicative votes" on options including a new EU membership referendum or a "soft Brexit" that maintains close economic ties to the bloc can find a majority for a new path.

May said the government would "engage constructively" with the results of the process. But she said she was skeptical that it would produce a decisive result.

Almost three years after Britons voted to walk away from the EU, the bloc's leaders seized control of the Brexit timetable last week to avert a chaotic departure at the end of this month that would be disruptive for the world's biggest trading bloc and deeply damaging for Britain.

The bloc granted Britain a delay to its exit in hope its deadlocked politicians can find a solution to the crisis. But the EU isn't counting on it. The European Commission said Monday it had completed planning for a "no-deal" Brexit — an outcome it called "increasingly likely."

For two years, Britain's departure date was set for March 29, 2019. Now, if the U.K. Parliament approves the divorce deal May struck with the bloc, it will leave the EU on May 22. If not, the U.K. has until April 12 to tell EU leaders what it plans to do — leave without a deal, cancel Brexit or chart a new path.

Parliament has rejected the deal twice, and May stands little chance of getting it approved unless she can win over Brexit-backing lawmakers in her Conservative Party and its Northern Irish ally, the Democratic Unionist Party. The DUP said Monday that the party's "position remains unchanged."

May has come under intense pressure to quit as the price of winning support for the deal.

At a meeting Sunday at the prime minister's country retreat, Chequers, prominent Brexiteers told May they might back the deal — if she agreed to step down so that a new leader could take charge of the next phase of negotiations, which will settle Britain's future relations with the EU.

Britain's best-selling newspaper, The Sun, piled pressure on May with a front-page call for the prime minister to resign, under the headline "Time's up, Theresa."

Former Foreign Secretary Boris Johnson accused the government of lacking "gumption" and chickening out on delivering Brexit. Writing in Monday's Daily Telegraph, Johnson said that to win support for her deal, May must show that the next phase of negotiations "will be different from the first."

That sounded like a hint he could support the deal if May agreed to quit. Johnson is likely to be a contender in any future Conservative leadership race.

May is hanging on, hoping she can persuade Brexit-backing lawmakers that rejecting her deal means Britain may never leave the EU.

She told lawmakers that she would not lead Britain out of the EU without a deal unless Parliament — which has already rejected the idea — voted for it.

"Unless this House agrees to it, no-deal will not happen," she said.

She added that canceling Brexit "must not happen," while "a slow Brexit" that involved a long delay to Britain's departure, "is not a Brexit that will bring the British people together."

The European Commission said Monday that it had finished planning for a no-deal Brexit, which could occur on April 12. The remaining 27 EU countries are hiring hundreds of people to conduct extra border and customs checks as well as to staff call centers set up to handle Brexit inquiries.

The commission warned that despite the preparations, a cliff-edge Brexit would cause "significant disruption for citizens and businesses" in the bloc. It said new tariffs and border checks would cause delays for both people and goods.

The bloc also said that more remained to be done on ensuring an open border between EU member Ireland and the U.K.'s Northern Ireland — something both sides have agreed to. Checkpoints there were a source of great tensions during the bloody Irish "troubles" from 1968 until the Good Friday peace agreement was sealed in 1998.

An EU official said the bloc was in "in intense discussions with the Irish authorities about these matters."

Opponents of Brexit feel the political tide may be turning in their favor. Hundreds of thousands of people marched through London on Saturday calling for a new referendum on whether to leave the EU or remain.

But with the deadline for a Brexit decision less than three weeks away, British politicians remain divided, and increasingly despairing about the country's political gridlock.

"Brexit is like the Death Star of politics," Conservative legislator George Freeman said. "I always feared it would be like this. It's destroying and soaking up all the prime minister's room for manoeuver and political goodwill.

"I've never known this country so divided, so angry and in such a dangerous state," he said.