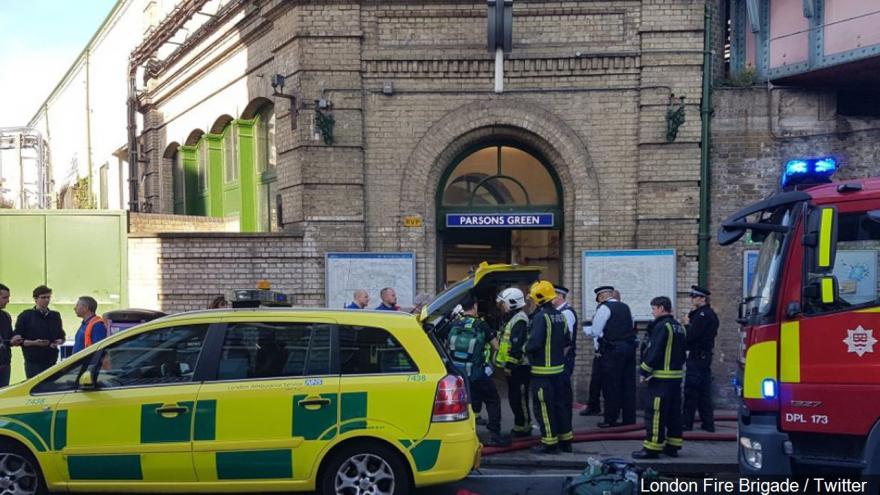 (CNN) -- The terror threat level in the United Kingdom has been raised from "severe" to "critical," Prime Minister Theresa May announced late Friday, following an explosion earlier on one of the city's Underground trains.

A major manhunt is underway in London for suspects in what police are calling a terrorist incident.

At least 29 people were injured. None of the injured are thought to be in a serious or life-threatening condition, according to the London Ambulance Service, which took 19 of the injured to hospitals.

Ten others went to hospitals on their own.

Most of the injuries appear to be the result of flash burns, according to local authorities.

The terror threat level of "critical" means that another attack is considered to be "imminent."

"The public will see more armed police on the transport network and on our streets, providing extra protection. This is a proportionate and sensible step which will provide extra reassurance and protection while the investigation progresses," May said.

"The threat of terrorism that we face is severe but together, by working together, we will defeat them."

The Prime Minister said that people should carry on with their daily lives, but be vigilant.

No arrests have been made. Hundreds of detectives are working on the inquiry with the support of Britain's domestic intelligence service, MI5.

Mark Rowley, assistant commissioner of the London Metropolitan Police, said that investigators were making "excellent progress" in identifying, locating and arresting those responsible.

Mayor Sadiq Khan echoed May and Rowley, telling Londoners they should "rest assured the full resources of our police and security services are being deployed to track down those responsible. They will be caught and brought to justice."

ISIS claimed involvement with the explosion saying, via its Amaq news agency that a "detachment" from the group had carried out the attack. When asked about possible ISIS involvement, Rowley told reporters that it is "routine" for the Islamic State to take responsibility for attacks in "these sorts of circumstances," regardless of the group's actual involvement.

ISIS provided no evidence to back up its involvement.

The blast occurred during the morning rush hour at about 8:20 a.m. local time (3:20 a.m. ET) Friday at Parsons Green Tube station, a leafy stop on a busy commuter line from southwest London into the center of the British capital.

Rowley said the blast was caused by a single improvised explosive device.

A British security source who was briefed on the investigation told CNN that a timer was found on the device. It's clear the device was intended to cause much greater damage, the source said, but cautioned that the investigation is still in its preliminary stages.

Another source briefed by investigators told CNN that an initial assessment of the device indicates it is "highly likely" to have contained the explosive TATP but that this has not been confirmed. It also appeared to have been crude and poorly designed, the source said.

In the aftermath of the explosion, Parsons Green station was closed, a wide security cordon was put in place and large numbers of emergency responders, including armed police officers, flooded the scene.

"Suddenly, there was this boom," eyewitness Gustavo Vieira told CNN. "Everyone shouting and screaming... We were just leaving the carriage [when the explosion happened]... everyone starting running... and I didn't look back."

He said people were taken to a nearby restaurant, where some were treated by first responders.

Another witness, software developer Sylvain Pennec, told CNN: "It was maybe 10 meters from me, the explosion. I didn't fully realize because I had my headphones on. I heard a big... 'Bam,' an explosion noise.

"When I looked I saw people starting to get scared. We were lucky because we were at the Parsons Green station and the doors were starting to open. Everyone managed to get out of the train."

Pennec said the device looked "like a big mayonnaise bucket" but he was unsure what was inside.

"I saw some people with burns, and things like that. But, from what I saw, most people were injured from the movement of the crowd," he added.

Police evacuated an area within a radius of about 55 yards around the station while they investigate.

"The evacuation has been necessary whilst specialist officers secure the remnants of the improvised device and ensure it is stable," a Met Police statement said, adding that a "small number of residents" would be affected.

Khan told CNN there would be "an enhanced police presence" across London's public transport system and urged people to be "vigilant and alert" -- but not alarmed.

"What we've seen in the last period across Europe is attempts by evil and cowardly individuals to kill, to injure and to disrupt our way of life and what we're not going to do is allow them to change how we live our lives, to be pluralistic, to be respectful," he said.

"We will do all we can to keep our city, to keep Londoners, to keep visitors, to keep businesses safe."

He added: "We are a safe global city."

US President Donald Trump told reporters in the White House Rose Garden that "we have to be tougher and we have to be smarter" in dealing with the terrorist threat.

Trump called the British Prime Minister "to offer his condolences over this morning's cowardly attack in London," a Downing Street spokesperson said.

Later in the day, speaking to members of the United States Air Force at Joint Base Andrews near Washington, Trump said "radical Islamic terrorism" would be eradicated.

He added, "America and our allies will never be intimidated. We will defend our people, our nations and our civilization from all who dare to threaten our way of life."

Trump had earlier responded to the incident in a series of tweets.

"Another attack in London by a loser terrorist. These are sick and demented people who were in the sights of Scotland Yard. Must be proactive!" he tweeted.

A police spokesperson told CNN that Trump's comment is "pure speculation given we don't know who is involved. Any speculation is unhelpful."

Asked by a journalist about Trump's tweets, May said: "I never think it's helpful for anybody to speculate on what is an ongoing investigation."

Local businesses and residents in Parsons Green -- an affluent, mainly residential area popular with families -- offered help to those in need.

Katy Llewellyn-Jones, who lives nearby and heard screams from the train, told CNN she had given shelter to a woman who had lost her shoes in the confusion and had asked for somewhere safe to go.

"It's frightening to think this can happen right by your home," said Llewellyn-Jones.

Police appealed for any witnesses to send in images and video from the scene.

There have already been four confirmed terror attacks in England this year, three of them in London and one in Manchester.

Update: This story has been updated to reflect the latest number of injured according to the National Health Service.