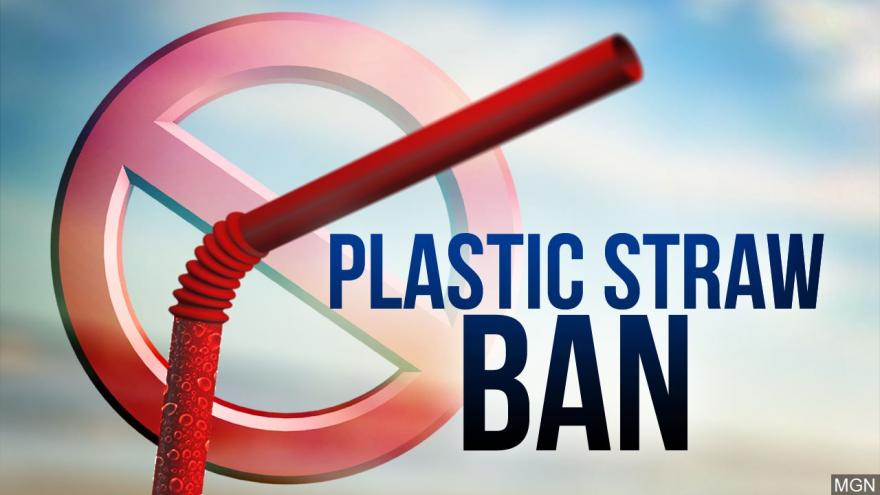 (CNN) -- Plastic straws, drink stirrers and cotton swabs could be banned in England under plans proposed by the UK government to reduce plastic waste and protect the world's oceans.

Prime Minister Theresa May will also call on all other Commonwealth countries to join the fight against plastic pollution as their leaders meet Thursday in London, Downing Street said.

"Plastic waste is one of the greatest environmental challenges facing the world, which is why protecting the marine environment is central to our agenda at the Commonwealth Heads of Government Meeting," May said.

She described the United Kingdom as a "world leader" on the issue of plastics, adding that the British public had "shown passion and energy embracing our plastic bag charge and microbead ban."

Besides its domestic efforts, the UK government is putting forward £61.4 million ($87.3 million) in funding for global research and improvements in waste management in developing countries, May said.

Environment Secretary Michael Gove will launch a consultation later this year on the plans to ban plastic-stemmed cotton swabs, stirrers and straws, Downing Street said. Industry will be given sufficient time to adapt, and the government will propose excluding plastic straws used for medical reasons.

"Single-use plastics are a scourge on our seas and lethal to our precious environment and wildlife so it is vital we act now," Gove said.

Many businesses in Britain have already taken steps to cut their use of plastic straws amid growing public concern about the impact of plastic waste on ocean life.

According to the UK government, 1 million birds and more than 100,000 sea mammals die every year from eating and getting tangled in plastic waste.

A UK government report released last month warned that the amount of plastic in oceans will triple between 2015 and 2025 if action isn't taken.

The proposals must become action, he said via Twitter, and the government should bring forward its "utterly unambitious" target of eliminating all avoidable plastic waste by 2042.

Louise Edge, senior oceans campaigner at environmental campaign group Greenpeace UK, said the UK government had made a "strong move" on banning some of the most unnecessary single-use plastics but that it was important to go further.

"Other non-recyclable 'problem plastic' should also be banned at the earliest opportunity," she said. "Greenpeace is encouraging retailers to take responsibility for their products, eliminate problem plastics immediately and to phase out single-use plastic in their own-brand products."

Last month, the UK government announced it intends to introduce a deposit on plastic bottles, requiring customers to pay an extra levy when buying single-use drink containers that will be refunded once those items are recycled. Similar programs are in effect in a number of countries, including Germany and Norway and in parts of the United States.

A report published this month that showed a significant drop in the number of plastic bags littering Britain's seabeds suggests that efforts to reduce their use by imposing a charge are working.