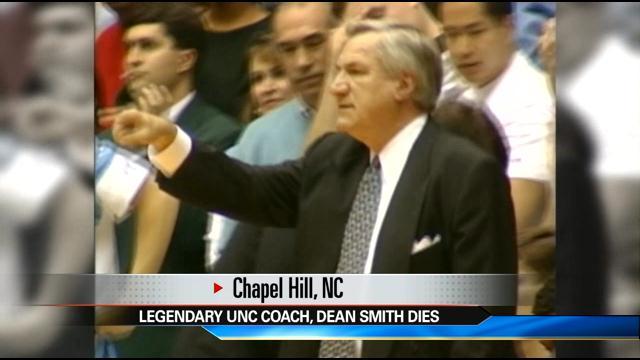 He had battled dementia for years, and according to a family statement provided to UNC, he "passed away peacefully" in his Chapel Hill home with his wife and five children by his side.

"It's a blessing in some ways," UNC coach Roy Williams, a longtime protege of Smith's, said at a news conference Sunday, "but it is also really hard."

Williams called Smith "the perfect picture of what a college basketball coach should have been." The 64-year-old Williams, who played for UNC's junior varsity squad in the 1960s and attended Smith's practices during college before serving as his assistant for a decade, further said everything he does in administering the school's basketball program "is driven by my desire to make Coach Smith proud."

"He set the standard for loyalty and concern for every one of his players, not just the games won or lost," Williams said in his statement. "He was the greatest there ever was on the court but far, far better off the court with people. His concern for people will be the legacy I will remember most."

Smith coached the Tar Heels from 1961 to 1997, tallying a record of 879-254 in those 36 seasons. The school named its basketball arena for Smith in 1986, and it's still popularly referred to as "the Dean Dome." On Sunday, fans left flowers outside the arena in his memory.

He also won two national championships, in 1982 and 1993, and many of his young charges went on to become some of the greatest players in pro basketball history, including Michael Jordan, Billy Cunningham, James Worthy and Vince Carter.

Echoing the sentiments of many who played under Smith, Jordan issued a statement, saying, "Other than my parents, no one had a bigger influence on my life than Coach Smith. He was more than a coach -- he was my mentor, my teacher, my second father. Coach was always there for me whenever I needed him and I loved him for it. In teaching me the game of basketball, he taught me about life."

Smith is often mentioned in the same breath as former Indiana and Texas Tech coach Bobby Knight, Syracuse's Jim Boeheim and longtime rival Mike Krzyzewski of Duke University, all of whom are considered among the greatest men's college basketball coaches of all time.

Krzyzewski said he was saddened by the news of Smith's passing and applauded him not only as a "magnificent teacher and tactician" but also as a compassionate mentor who believed instilling dignity in his players was as important as honing their basketball skills.

"His greatest gift was his unique ability to teach what it takes to become a good man. That was easy for him to do because he was a great man himself. All of his players benefited greatly from his basketball teaching, but even more from his ability to help mold men of integrity, honor and purpose. Those teachings, specifically, will live forever in those he touched," the coach said in a statement.

"He designed Carolina's 'Four Corners' offense, devised the foul-line huddle, created the 'fatigue signal' and implemented the 'run-and-jump' defense," according to his Hall of Fame biography.

The Emporia, Kansas-born son of two teachers was also a hoopster in his own right and, with his 1952 championship as a Kansas Jayhawk, is one of only two men to win college basketball championships as a coach and player. Knight is the other.

A four-time National Coach of the Year, Smith is one of only three coaches to win the National Invitation Tournament, the NCAA Tournament and Olympic Gold. He led the U.S. men's team to victory in the 1976 Montreal games.

In 2013, Smith joined former President Bill Clinton and entertainer Oprah Winfrey as Presidential Medal of Freedom recipients. President Obama said during the ceremony, "While Coach Smith couldn't join us today due to an illness that he's facing with extraordinary courage, we also honor his courage in helping to change our country -- he recruited the first black scholarship athlete to North Carolina and helped to integrate a restaurant and a neighborhood in Chapel Hill. That's the kind of character that he represented on and off the court."

On Sunday, Obama issued a statement praising Smith's basketball acumen as well as his leadership skills, saying he "reared a generation of players who went on to even better things elsewhere, including a young man named Michael Jordan -- and all of us from Chicago are thankful for that.

"But more importantly, Coach Smith showed us something that I've seen again and again on the court -- that basketball can tell us a lot more about who you are than a jumpshot alone ever could. He graduated more than 96 percent of his players and taught his teams to point to the teammate who passed them the ball after a basket," the statement said.

Smith broke UNC's color barrier for scholarship athletes in 1967 with his recruitment of Charles Scott, a would-be two-time All-American who would help skipper the Tar Heels to consecutive NCAA Final Four appearances in 1968 and 1969.

Despite averaging 22 points and seven rebounds a game throughout his college career, Scott was passed over for Atlantic Coast Conference player of the year honors. It's telling that he once told a Greensboro, North Carolina, newspaper that the snub was the one time in college "that I felt things were done in a prejudicial manner.

"And what concerned me more was how the media handled it. Nobody ever said anything about it, never challenged what took place. To me, that's just another form of hypocrisy," he told the News & Record.

Smith left such an indelible mark on Scott's life that when Scott spoke at an awards ceremony for Smith many years later, he said, "When they introduce Coach Smith's family, why don't they mention my name? My father died when I was 12 years old, and Dean Smith is the only father I ever had."

'It's just not fair'

Recruiting Scott wasn't Smith's first foray into integration. In the 1950s, when Smith was an assistant coach at UNC, a pastor at an inclusive Baptist church asked Smith to dine with him and a black student at a then-popular Chapel Hill restaurant that, like most eateries in the city, had a policy of not serving African-Americans. Smith agreed, and the three were allowed to dine.

"We're human beings first, coaches and players second, and in the '60s we had to strike an extremely delicate balance between the two," Smith once wrote.

The longtime Democrat would go on to strike that balance often, speaking out against the Vietnam War, the Iraq War, nuclear proliferation and the death penalty, among other causes.

"America lost not just a coaching legend, but a gentleman and a citizen," Obama said in his Sunday statement.

Smith's wife, Linnea, accepted the 2013 Presidential Medal of Freedom on behalf of her husband, who had been fighting dementia for years.

Sportswriter John Feinstein, who reportedly abandoned a biography on Smith because of his memory lapses, wrote a column for Smith's 83rd birthday last year, outlining how Smith refused to engage in self-pity because he'd led such a great life and knew there were people suffering more than he was.

Dementia was a particularly cruel fate to befall a man who "remembered every name, every game, every play in every game. He also remembered every call that went against him and anything written or said about one of his players or friends that he thought was a slight -- real or perceived. He never asked me how my kids were. He asked how Danny and Brigid were," wrote Feinstein, who says he first noticed Smith's flagging memory in 2005.

Even Krzyzewski, his longtime rival -- and some might say archrival, given the fierce history of competition between UNC and Duke -- concurred.

"You're talking about the person who had the sharpest mind and the most remarkable memory of anyone I've ever met. It's just not fair," Feinstein quoted Krzyzewski as saying.