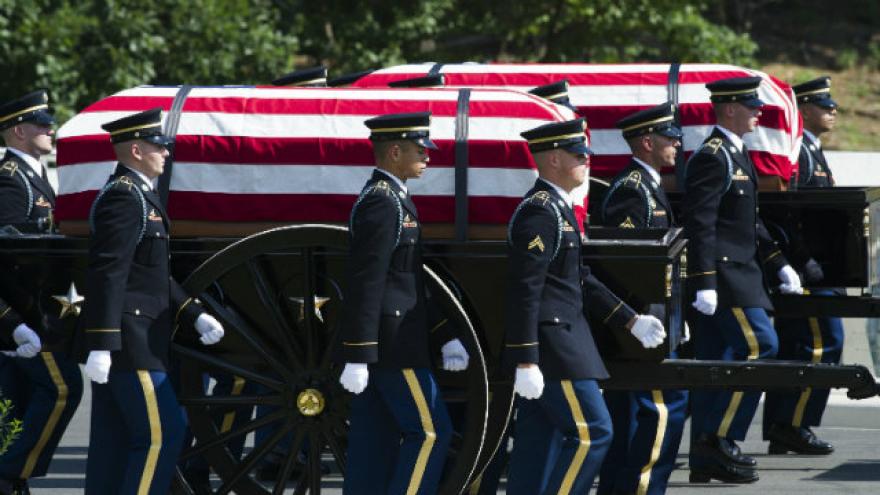 The 3rd US Infantry Regiment, also known as the Old Guard, escorts the remains at Arlington. Photo courtesy Cliff Owen/AP

By Phil Gast and Steve Almasy

(CNN) -- Brandon Bies and his staff had a mission. They wanted to ensure two Civil War soldiers whose bones he first handled nearly three years before would be surrounded in eternity by emblems of a grateful nation.

So the staff at Manassas National Battlefield Park in Northern Virginia went to work this summer. With the help of volunteers, they used planks from a fallen white oak in the park to carefully fashion coffins. Then Bies, superintendent of the park, wrapped the skeletal remains in reproduction Union Army blankets, with the letters "US" stitched into the fabric.

On Thursday afternoon, the soldiers were buried in a new section at Arlington National Cemetery. The service amplified the precision and respect that went into preparing these unknown men for interment.

"These two men, these two American soldiers, are forever part of that history," P. Daniel Smith, deputy director of the National Park Service, said of the first in-ground burials in the new 27-acre Millennium site. More than 2,100 Civil War unknown soldiers are buried in a crypt near the cemetery's Arlington House.

The story of the discovery of the soldiers -- more than 150 years after they died -- is remarkable in itself.

Bone fragments were found in an undisclosed area of the park during a utility project in 2014. The next year, National Park Service and Smithsonian Institution archaeologists excavated the site.

They uncovered a shallow "limb pit," hastily dug to hold the two soldiers and nearly a dozen amputated limbs of other soldiers. The pit dates from the Second Battle of Bull Run in August 1862, a decisive victory for Confederates.

"It's important to remember these American soldiers and the families that never found out what happened to them," Bies said.

One soldier, who was believed to be in his lates 20s, died of injuries from a bullet striking and lodging in his upper leg. The second soldier, estimated to be between 30 and 34 years old, died as a result of a buck and ball shot to the upper arm, pelvis and leg.

Bies, an archaeologist who helped in the excavation in 2015, said they were likely wounded during a charge up Deep Cut, where they received withering Confederate fire.

As casualties piled into tents not far from the fighting, Civil War surgeons had to make quick decisions on who might have a chance of going home -- without an arm or leg -- and who was too seriously hurt to be operated on. It appears the injuries to the two were too severe to be treated successfully.

The find "personalizes the story and helps people understand the difficult decisions" facing surgeons at the front, said Jenny Anzelmo-Sarles, an NPS spokeswoman.

So, from which state or region did the pair hail?

Analysis of isotopes in the bones, which looked at what had been in drinking water the men consumed, indicated they are likely from New York or New England, Bies said. New York troops were involved in the fighting at Deep Cut.

Anzelmo-Sarles said the Manassas staff's work on the period-style coffins -- which were inserted inside government-issued caskets for burial -- was a labor of love. The 90-year-old wood was sent to a kiln early in summer to dry, then was milled into thick planks.

A cabinetmaker assisted in getting just the right fit. "Our staff and volunteers sweat over every detail in wanting to show respect for these soldiers and took great pride in their work," she said.

Karen Durham-Aguilera, executive director of Army National Military Cemeteries, told those attending Thursday: "These two Union Soldiers, whom fate and time have obscured their identity, will now lay near others who served -- and fell -- in that conflict. These soldiers, fallen in battle, will now take their place among others who heard their nation's call to serve."

Officials said the Millennium expansion at Arlington will help extend the active life of the cemetery until the early 2040s.

With Arlington running out of space, the expansion provides 27,282 interment spaces, including 16,400 for cremated remains in above-ground columbarium courts, officials said.

Bies and others said it's important that everything surrounding fallen soldiers is done with deep respect.

"The nation treats these men," he said, "as if they were killed in action a week ago."