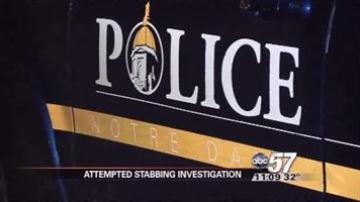 NOTRE DAME, Ind. -- A Notre Dame student has a warrant out for her arrest!

Police said 20-year-old Vanessa E. Cabello tried to stab a classmate with a knife! Cabello claims she was raped by the male student she attempted to stab.

The attempted stabbing incident happened on Sunday in a Siegfried Hall dorm room. Campus security questioned Cabello about the incident, but no arrests were made.

Cabello is now facing Attempted Battery charges, a Class C Felony. An arrest warrant was issued on Wednesday.  Bond is set at $30,000 corporate surety or $3,000 cash.

Police said the male student was able to overpower Cabello. He locked her in the dorm room until police showed up.

The Prosecutor's Office said that Notre Dame police are investigating her rape claims.

University Spokesperson Dennis Brown released a statement in regards to the charges and allegations on Wednesday evening:

"Notre Dame is deeply troubled by these events and continues to take all appropriate action to ensure the safety of everyone involved and hold accountable those who have violated the law and/or University policy.

In response to the circumstances that led to Wednesday’s charges against Ms. Cabello, the case was immediately and thoroughly investigated by Notre Dame Security Police and turned over to local law enforcement authorities. The University has and will continue to work with the authorities as this matter proceeds through the criminal justice system. Whenever the University is made aware of a sexual assault allegation, we take the report seriously and conduct a prompt and thorough investigation."