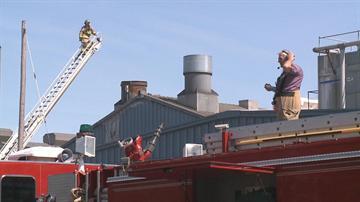 BERRIEN SPRINGS, Mich. – Employees were evacuated from a tool and die shop Wednesday afternoon for a business fire in Berrien Springs.

Just after 3:30 p.m. a fire broke out at Premier Tool and Die Cast Corp on N. Tudor Road.

Several employees told ABC 57 News a worker poured molten metal onto liquid which sparked a fire that reached the roof of the building.

Bruce Stover with the Berrien Springs Fire Department said the fire was contained by 6:30 p.m. and things were up and running again shortly. “Other than the ventilation system that needs to be cleaned and repaired they’re going to be ok,” he said. “They’ll be back in operation within an hour.”

Nobody was injured in the fire.

Snow Road in Berrien Springs was closed to traffic for approximately three hours.