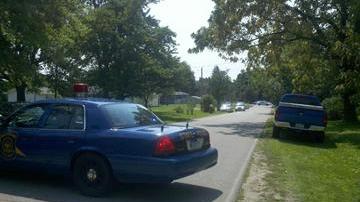 Niles, Mich. -- Cass County Sheriff's Department is looking for two people who are believed to be involved in a shooting.

A driver called 9-1-1 and said they witnessed a shooting at a home on Carberry Rd. The investigation is underway near the Spiritual Vision of God Church.

When police responded, they didn't find anyone who had been injured. However, officers were able to confirm that there had been an argument in the front yard.

Witnesses told police that after the argument, a man walked back to his car to get a gun, then started shooting at a group of people in the backyard. He then got back into his car and drove away.

Investigators said the suspect is 21-year-old Anthony Quintel Bostick of Niles, Mich. He is 5-foot-8 and 120-pounds. We have attached photos the police provided to our photo gallery.