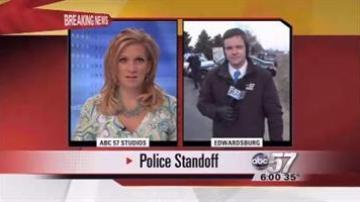 CASS COUNTY, Mich. -- Officers in Cass County have been working at a standoff for more than eleven hours now.
Right now, Redfield Street is blocked off between Martin and Adamsville Roads.
The man inside the home has been identified as Mike Long.
Police were called to the home just after 9 a.m. Monday on the 71000 block of Redfield Street. It was determined that Long had locked himself inside with a gun and making 'threats'.

Workers in a nearby farm field were asked to leave by police. "They told us there was somebody barricaded in the house making threats with a long gun and that we were too close we should leave," said Israel Stark, who was installing an irrigation system in an adjacent field.
According to Cass County Prosecutor Victor Fitz, negotiations have been ongoing with Long throughout the day. "Officers are using their training to make sure this is properly negotiated and the communications are occurring that need to occur," said Fitz.
At one point Long's twin brother approached the scene with police but was escorted out a few minutes later.
A man claiming to be Long's best friend was handcuffed by police when attempting to enter the barricaded area. He was calmed down and later released.
Family and friends of Long sat in their vehicles near the police barricade about a half-mile from the home.
Family tells ABC 57 News that Long had a dispute with his ex wife leading up the incident. The home on Redfield Street had belonged to both Long and his ex wife. Recently, they said it had belonged to only the ex wife.
Police are directing traffic around the block. There is also an ambulance waiting on the scene.

There is an ABC 57 News crew at the scene.

We will bring you more information as this story develops.
Share this article: