UPDATE: Children among highest risk groups for the flu 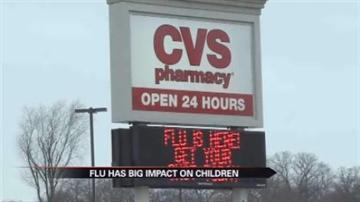 SOUTH BEND, Ind. -- Children are in one of the highest risk groups for the flu. Doctors say that it is largely caused by their inability to fight off infections.

The flu virus travels in the air, making the flu highly contagious.  Pediatricians say that the flu attacks children's immune systems, and if it is not treated early, it can cause extreme dehydration and other complications.

According to Dr. Waldemar Rosario, a Med-Point pediatrician, "The infection can spread around the body and cause more problems and they can get very sick."

With the flu running rampant, pediatricians recommend even babies as young as six months old get flu shots this year.

To parents who say that they do not think that the flu shot is a good idea, Dr. Rosario says it can be life saving.

"There's a lot of protection that you can give to kids.  There's people that die from the flu and this is something that can be prevented."

Doctors say that some believe that vomiting is the only sign of the flu, but they say that is a myth.  Fevers, body aches, sore throats, are all flu symptoms.  If your child has any of these symptoms, doctors say do not send them to school; get them in to see a physician immediately.