UPDATE: Convicted cop killer trying to get a new trial 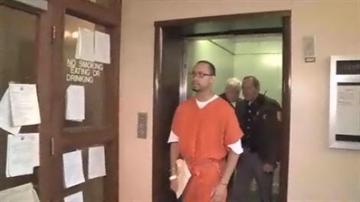 SOUTH BEND, Ind. -- It's a convicted cop killer's last chance to appeal his 1999 murder conviction and he's leaning on new evidence from FBI experts to convince a local judge he deserves a new trial.

Dickens was only a teen when he was convicted of killing Deguch, but now he is appealing the conviction after new research showed a forensic method used in the case was flawed.

Tuesday's court hearing was packed with both Dickens and Deguch's family members, along with several police officers and the loved ones of other local fallen officers.

Since the beginning, Dickens maintained his innocence and his family feels this new evidence proves it.

"I know my son didn't do it and it's their job to find the one who did it," said Dickens mother Annette Adkins.

In August of 1997 South Bend police officer Corporal Paul Deguch was gunned down on Talbot Street in South Bend while questioning a suspect riding a bike.

The 30-year-old later died in the hospital from several gunshot wounds, including one to the head. Deguch left behind a wife and three kids, his daughter just two months old at the time of his death.

Three hours after the shooting, a then 16-year-old Dickens was arrested for Deguch's murder. Two years later, in 1999, Dickens was convicted and sentenced to life in prison without parole.

Now, in light of new evidence, Dickens is appealing his conviction for a second time.

"They didn't get who they needed to get, they got who they wanted to get, my son," said Adkins.

Tuesday, three witnesses were called to the stand by the defense to testify before Judge Jane Woodward Miller.

First, Dickens' attorney called William Ross, Jr. to the stand, who is currently in prison in southern Indiana. Ross was at the home where police say Dickens shot Deguch on the porch.

Tuesday Ross discredited the testimony of another witness who was with him inside the house. Unlike Ross, The other witness testified in the trial that he saw Dickens running from the scene that night.

During the trial, both witnesses said they heard the gunshots and looked out the window to see the officer on the ground. According to testimony heard Tuesday, Ross said the other witnesses later told his friends he hadn't really seen anything and couldn't be sure it was Dickens he saw running away.

Then, the defense called two FBI experts, with more than 20 years with the agency, to talk about comparative bullet-lead analysis. Dr. Marc LeBeau, a forensic scientist with the FBI, was on the stand for hours.

The forensic method was used by the state during the trial to connect the bullets that killed Deguch to the box of bullets police found in Dickens' bedroom.

In 2005 the FBI stopped using the method after research revealed it was flawed and that it couldn't accurately narrow down exactly which box of bullets a particular bullet came from.

The findings of the research affected at least 2,500 other cases around the country.

The FBI says it notified all the defendants who may have been wrongly accused of a crime based on the technique back in 2007. The move came when the agency came under fire after accusations they failed to notify all the defendants.

"He has been fighting for his life for 15 years and we are tired. We are ready for my son to come home for something he didn't do," said Adkins.

The hearing is expected to wrap up Wednesday. The defense plans to call two more witnesses before the prosecutor presents its case.

Judge Miller will then have 90 days to make a decision on whether the new evidence presented by the defense is compelling enough to order a retrial.