UPDATE: Firefighters had to free drivers from cars after severe crash 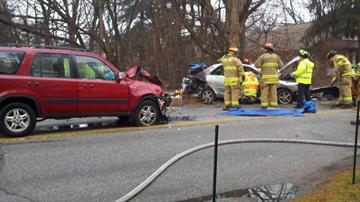 GRANGER, Ind. – More details have been released about a two-car crash in Granger that was thought to leave one driver in critical condition.

Police said the Toyota then spun off the east side of the roadway into a large tree.

Firefighters had to rescue the drivers, and a passenger from their cars. They were trapped inside.

Mehran and his 24-year-old son were taken to Memorial Hospital for treatment. Mehran was thought to be in critical condition, but was upgraded shortly after arriving.

Roher was taken to St. Joseph Regional Medical Center after telling paramedics she was having chest pains.

Toxicology tests were performed at the hospital, but will take several weeks to return.

Investigators said they believe a medical condition, such as a diabetic reaction, may be what caused the crash.