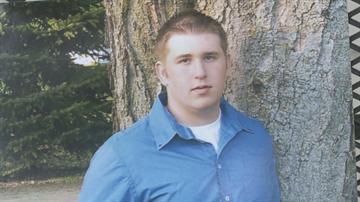 Berrien County police were called to the 5400 block of Shanghai Road around 3:30 a.m. David Quinn Jr. was found shot to death. According to Quinn’s family, the juvenile arrested was Quinn’s 16-year-old girlfriend.

“I knew it wasn’t good when I saw the dogs,” said Patricia Breyen, a neighbor across the street from the home.

Breyen witnessed the first police cars pull up to the scene. “(It) just gave me a gut feeling… that this is not good,” she said.

As of Tuesday night, investigators had released very little information about the circumstances leading to the shooting.

“This is like big town stuff not like little suburban (stuff) here,” said Margo Spletzer, another neighbor. “It’s scary.”

Spletzer said everyone knows each other in the small neighborhood. Many of Quinn’s family live in nearby homes.

“We all know each other,” she said. “If anything happens to anybody we all know within seconds.”

The home displays a ‘for sale’ sign. According to the realtor, the house had just been foreclosed on.

Neighbors said Quinn’s parents moved to a different nearby home last week. Breyen said Quinn and his girlfriend were the only ones living inside. “I noticed the kid’s car. I know the kid’s car,” said Breyen. “I’ve known these people for 37 years.”

Breyen never thought anything was wrong. She said they’ve been good neighbors and she’s known Quinn all his life. “I’m hoping everything’s ok and it doesn’t sound like it,” she said.

The Berrien County prosecutor is expected to decide Wednesday if the juvenile suspect will be charged as an adult.

Quinn's family told ABC 57 News that Quinn was an avid hunter and fisherman and had graduated from automotive college in Nashville a year ago.