UPDATE: Names released in LaPaz crash, one man sent to the hospital 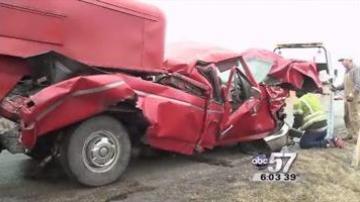 LAPAZ, Ind. -- We now know the names of the drivers involved in a severe crash that happened in LaPaz on Tuesday morning.

82-year-old Leroy Piper of Valparaiso had to be airlifted to Memorial Hospital following a severe crash between his Ford pick-up truck and a semi on U.S. 31 and U.S. 6.

The collision happened at about 11:45 a.m. on Tuesday.

The Indiana State Police, Marshall County Sheriff's Department, LaPaz Fire and EMS and Plymouth EMS all responded to the site of the crash.

Preliminary reports from the Indiana State Police indicate that Piper drove through a  red light into the path of the semi. The semi was being driven by 60-year-old John Drummond of Mishawaka. Witnesses told police that Drummond was traveling on US 6, and attempting to turn south on a green arrow onto US 31 when Piper ran the red light and struck the side of the semi.

Piper's pick-up truck became lodged under the semi when the vehicles collided. That's when things got really scary. The pick-up truck caught fire. Piper was pinned inside and couldn't get out. Crews had to rush to put out the fire, and then were able to free him from the truck.

Piper received non-lifethreatening injuries to his head and arms, and was conscious when he was airlifted to Memorial Hospital for treatment.

Drummond was not injured in the crash.

The animal trailer that Piper was towing was mangled in the crash. Police said that, luckily, the five or six cows inside made it out just fine.

There was a large diesel fuel spill in the intersection, which crews are working to clean up. The intersection was closed for about an hour and a half. Southbound traffic was being re-routed, but has since cleared up.

The accident as it is still under investigation. We will bring you more information in later editions of ABC 57 News.