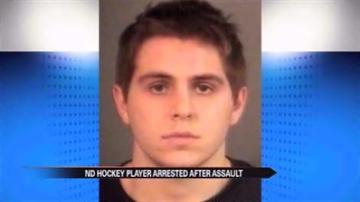 SOUTH BEND, Ind. -- Notre Dame hockey player Jared Beers has been suspended indefinitely after his arrest on February 3. He has been charged with trespassing, battery and resisting law enforcement, according to court documents.

Beers is accused of refusing to leave the Brothers Bar and Grill on Eddy Street in South Bend on February 3rd after Allison Frame asked him to leave, according to the court documents.

He is also accused of resisting arrest, according to reports.

Jeff Jackson, the head coach of the Notre Dame hockey team announced that Beers, a junior defenseman, has been suspended indefinitely.

“The University is aware of this incident and is confident that it will be handled in a prompt and professional manner through the criminal justice system,” said Notre Dame spokesman Dennis Brown.