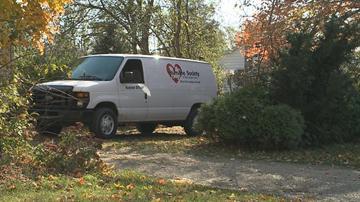 ST. JOSEPH COUNTY, Ind. – Two women were attacked and badly injured by a pit-bull around 11 a.m. Tuesday.  St. Joseph County Police received a frantic 911 call from a woman in a home on the 56000-block of Oak Road, she told them she and another woman were being attacked by a pitbull and begged the police to come quickly.

“The story that we were being told was that a stray, white dog jumped through the door and attacked their other dog,” explained Chief Humane Officer for St. Joseph County Jordan McGuire, who responded with police.

Puncture wounds, broken bones and scratches are normal for a dog attack.  But, for the animal control officers who usually deal with attack scenes, it was unusually brutal.

"This is probably the worst one I've seen in the three years that I've been here,” described Jordan McGuire.  “The severity of the bite and the blood loss that is seen on the deck and in the house as well."

The property owner, who is related to the two women who were attacked, was on scene and told police that a stray dog had broken into the home and attacked one of their dogs and then the two women.  But, the story didn’t seem right to police and animal control.

"They said that there was two dogs inside the house, when we actually did a sweep inside the house the only dog inside was the dog that was owned by the property owners," McGuire explained.

The two women were taken to Memorial Hospital in South Bend and are expected to be OK.  Another pitbull attack had been reported at the same home about one-month ago, police found evidence that a dog had broken into the home and attacked other dogs.  But, this time, the evidence didn’t fit the description of the dog being attacked.

“There’s no injuries on this dog so the proof of actually another dog coming into this house and attacking, I could not find any,” McGuire explained.

Police questioned the victims in the hospital, where they admitted that one of their pitbulls had attacked them.  First, the dog attacked the 68-year-old woman and the 47-year-old tried to pull it off.

“I know it’s everybody’s instinct to jump in and help to break them up,” McGuire cautioned.  “Actually what you’re doing is subjecting yourself to being bitten and attacked as well.”

The victims and the dog’s owner claim the dog had a seizure before it attacked.  So far, the owner has refused to turn the dog over to the St. Joseph County Humane Society, which handles animal control outside of South Bend city limits.  The animal cannot be taken from the owner until further investigation into the case.