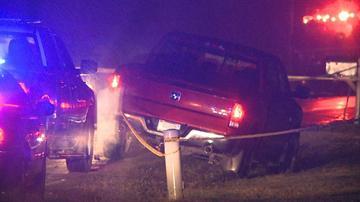 MARSHALL COUNTY, Ind. – A Plymouth man is dead after being shot by police officers on North Quince Road between La Paz and Walkerton at the end of a long pursuit across Marshall County.

According to Sgt. Trent Smith of the Indiana State Police, the chase began at around 8:30 p.m. when an Argos Police officer attempted to pull over Mark Albright, 62, on suspicion of drunk driving north of Argos on Michigan Road.  Albright fled and led officers from a number of departments on a chase up US-31 and eventually onto US-6.  He then turned onto Quince Road, jumped out of his truck and attempted to run.

“Officers yelled at him to stop,” Sgt. Smith explained, relaying what officers involved in the chase had said.  “That’s when it appeared the suspect turned around at that time, pointed a handgun and fired two shots.”

Officers fired several shots and hit Albright multiple times.  He was taken to Memorial Hospital in South Bend but later died of his injuries.

The names of the officers involved in the shooting are not being released at this time.   Nobody else was hurt as a result of the shooting.