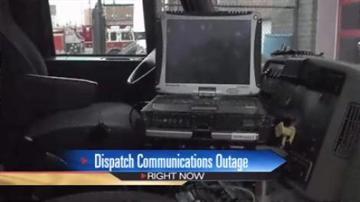 SOUTH BEND, Ind. -- Emergency crews in South Bend are dealing with another communication outage. Their data system is down, which means officers are not getting important dispatches over their computers, They are only receiving information from their digital radios.

Trent says the box that controls the computerized data communications between 911 dispatchers inside of the police department and patrol officers in the field was acting ‘quirky.’

"We found that it was acting kind of quirky,” said Trent.

That's when the plug was pulled on the system.

"We've been working on it all day,” said Trent.

That means firefighters and police have no computerized communication with the city's 911 dispatch center.

"When the data system goes down what it means for us is we can't finish writing a report,” said Jim Lopez, South Bend Fire Department Operations Chief Jim Lopez.

Lopez says it’s not as critical for firefighters and ambulance crews to make reports in the field, as it is for police officers who could be handling multiple calls in a row.

"They had to go old school and start using paper and pens to copy down addresses to dispatches and they are going to have to hand type their reports on a computer elsewhere,” said Trent.

All-city emergency responders have radio systems that they also use to communicate with 911 dispatchers.

"The patrol officers have two radios, a vehicle mounted radio and a portable radio with them during their entire shift and everything is dispatched by voice as well. So it's not as if they are missing a dispatch,” said Trent.

This is the second major communications failure for the departments in just two months. Back in February their new multi-million dollar radio system went down forcing them to find old radios.

This morning, the city’s data dispatch was interrupted as a result of preventive maintenance [installing a new battery for the Uninterrupted Power Supply (UPS)]. Through built-in redundancies, emergency responders have access to both data dispatch and radio dispatch, meaning that if one dispatch goes offline information can still be exchanged via the other. Emergency responders continue to have access to information via their radios, both in their vehicles and on their person.

The city cut power from the old UPS and is currently running on AEP electric, which is backed up by a generator. Though they may not have data dispatch, emergency responders have access to information via radio dispatch. There has been no interruption to the city’s public safety services. We’re pleased the city continues to undergo preventive maintenance in this critical area and is doing so in a way that – as a result of redundancies built into the system – ensures continued flow of information to our emergency responders.

Captain Trent said they were hoping to resolve the problem by today. However it doesn't look possible. He said a new state of the art backup battery for the data communications equipment was on it's way to the dispatch center and would be arriving soon. He said this new battery is designed more efficiently and will hopefully restore the system to full capacity.