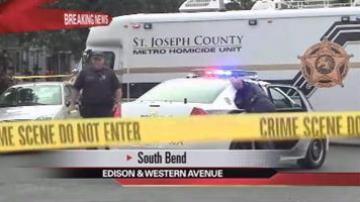 SOUTH BEND, Ind. -- Police are investigating a double shooting that left one man dead and a woman in critical condition.

Police were call to 429 South Edison Avenue just after 6 p.m. Thursday night for shots fire. When officers arrived at the home, they found a young man in the street with a fatal gunshot wound. The woman was on the sidewalk with a serious gunshot wound to hip and was rushed to Memorial hospital.

Freddie Smith, Jr., 29, was shot and killed during the shooting. Neighbors say Smith was friends with the woman's boyfriend and that her boyfriend was the shooter. Witnesses say the gunman accidentally shot his girlfriend after he opened fire on smith outside the home.

Police brought the man in for questioning, but no arrests have been made. There is still no word on what lead to the shooting. Neighbors say they heard a total of eight gunshots, but say they did not hear or see an altercation before shots were fired.