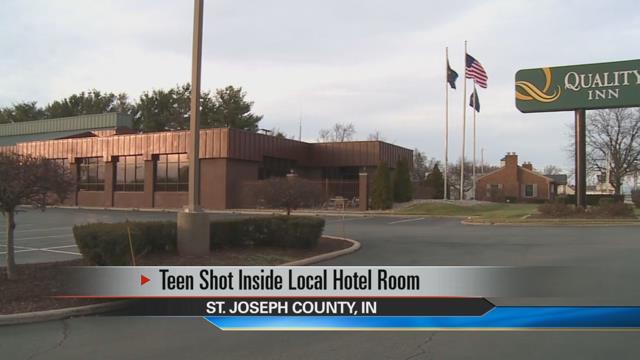 An Elkhart 13-year-old was sent to the hospital this weekend after police say he was accidentally shot at the Quality Inn on 933.

County Police say some parents rented out a room at the Inn for a child's birthday party Saturday evening.

After the party ended, police say a group of those kids, ages 13-19 lied to their parents and stayed in the room.

According to police, early Sunday morning, two of the unsupervised kids started fighting over a gun.

The gun went off, and hit the 13-year-old boy from Elkhart in the face.

He was taken to the hospital and is in stable condition.

Police say no evidence of drugs or alcohol were found in the room and the witnesses are cooperative.

However, authorities do think there’s still a lesson to be learned about kids being left alone.

“Part of the problem here is we had some kids that were unsupervised in a hotel room so there’s a tendency for them to even have fewer inhibitions than kids already have. So that’s problematic. And anytime you introduce a firearm in that mix, then you have significant probability increase of something bad happening,” Assistant Chief Bill Thompson of St. Joseph County Police, said.

It’s unclear yet if charges will be filed.

Right now police are trying to figure out how the underage teens obtained a gun in the first place.