US Attorney Bharara fired in standoff with Trump 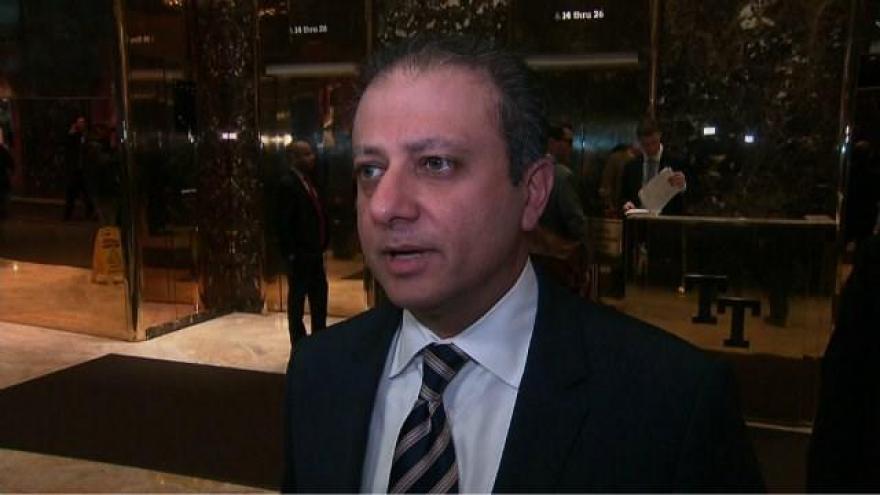 (CNN) -- Preet Bharara, the US attorney for the Southern District of New York, tweeted Saturday that he was fired after indicating he would not submit a letter of resignation as requested by President Donald Trump's administration.

"I did not resign. Moments ago I was fired," Bharara wrote on his verified Twitter account Saturday afternoon. "Being the US Attorney in SDNY will forever be the greatest honor of my professional life."

The move placed the President in the position of having to fire Bharara in what became a public standoff. Acting Deputy Attorney General Dana Boente called Bharara on Saturday and asked if it was true that he was refusing to resign, a source told CNN. Bharara told him yes.

Boente then called Bharara back and said Trump was firing him, the source said.

A source familiar with the situation also said Boente at first wasn't able to reach Bharara and left a message, and the US attorney repeatedly attempted to return the call, to no avail.

A senior administration official told CNN that Bharara was asked for his resignation along with every other US attorney except for Boente and and the nominee to be his replacement as deputy attorney general, Rod Rosenstein, "because of uniformity. It's important to have consistency and uniformity in matters like this."

A former FBI agent who requested anonymity to freely discuss the matter called Bharara's firing "crazy," saying he is a "rock star" in the law enforcement community.

The high-profile US attorney had been told after a meeting with Trump in November that he would stay on and felt blindsided by the move, sources told CNN.

In a statement Saturday, Sen. Chuck Schumer said he was "troubled" to learn of the Trump administration's request for Bharara's and other US attorneys' resignations, adding that the President initiated a call to him in November "and assured me he wanted Mr. Bharara to continue to serve as U.S. Attorney for the Southern District.

"While it's true that presidents from both parties made their own choices for U.S. attorney positions across the country, they have always done so in an orderly fashion that doesn't put ongoing investigations at risk," the New York Democrat said. "They ask for letters of resignation, but the attorneys are allowed to stay on the job until their successor is confirmed."

By asking for the immediate resignations of the remaining US attorneys before their replacements have been confirmed, "the President is interrupting ongoing cases and investigations and hindering the administration of justice," Schumer said.