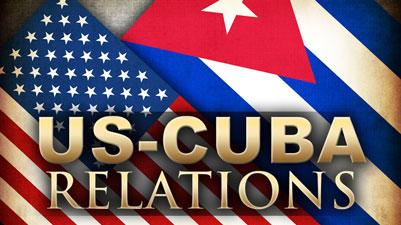 Diplomacy between the US and Cuba is underway and Cubans are left wondering what this means.

For Republican Cuban-American lawmakers, they are describing President Obama's historic announcement as a raw deal.

“Implications of this deal will extend beyond Cuba,” says Senator Marco Rubio (R-Fla.).

The Obama administration is moving forward to reverse more than 50 years of history between the United States and Cuba.

“We will begin the process of restoration of diplomatic relations. We can do that via an exchange of letters or of notes. It doesn't require a formal legal treaty or agreement,” says Assistant Secretary of State Roberta Jacobson.

Some of the issues calling for change include the reopening of an embassy in Havana and starting to ease some economic sanctions.

In Havana, there was cautious optimism, but in the Cuban-American community in south Florida, there are strong opinions on both sides of the issue.

“I think it's an awful day for Cuba. I think the deal was bad because the Cubans, they didn't get anything. We lost again,” says Cuban-American Laura.

Showing an opposing opinion, another Cuban-American, Leandro, says, “Anything that shows change, anything that brings countries together is a good day.”

More than a year of high-level secret talks took place between the US and Cuba for the release of one American and three Cuban spies, and Pope Francis played a key role in the process, making personal appeals to President Obama and Cuban President Raul Castro.

The Vatican helped coordinate meetings between US and Cuban officials.
Share this article: