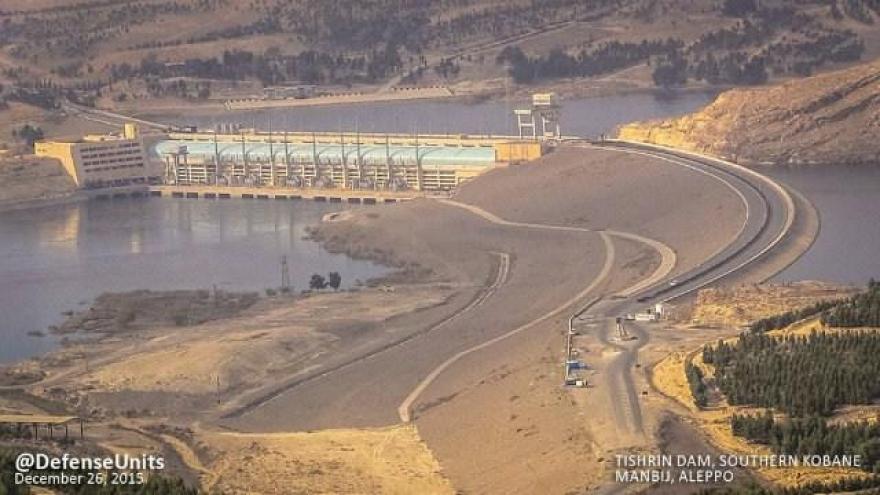 WASHINGTON (CNN) -- Fighters in Syria have begun a major ground offensive, backed up by US forces, to retake a vital dam near Raqqa, Syria, from ISIS, a US official told CNN Wednesday.

The attack also included an unprecedented air assault involving US helicopters landing behind enemy lines -- flying about 500 local US allies and coalition military advisers across the Euphrates River and Lake Assad so they could attack the ISIS-controlled dam and neighboring town and airfield from the south.

"This is the first time we have conducted an air movement, air assault, with the Syrian Arab Coalition and Syrian Democratic Forces," Col. Joseph Scrocca, a coalition public affairs officer, said. On a call with reporters from Baghdad Wednesday, Scrocca called the air operation a "daring assault behind enemy lines."

Scrocca would not say how many troops were involved, but a military source said about 500 troops were airlifted behind enemy lines. The attack was backed by US Marines firing M777 howitzers and close air support, including airstrikes carried out by Apache helicopters.

But ISIS remains in control of the area after the attack, and weeks of tough fighting could remain, Scrocca said.

"We believe there are foreign fighters there, probably in the hundreds," he said. "The (Syrian Democratic Forces) and our partners there are facing a pretty heavy fight -- that's what makes this type of operation so daring. I think we were lucky we caught ISIS by surprise. They are still reacting to this maneuver."

Tabqa Dam is located 25 miles west of Raqqa, ISIS' self-declared capital, and supplies electric power to a wide area of Syria, according to the US. The area has been under ISIS control since 2013.

Retaking the dam is considered a vital step toward further isolating the area around Raqqa and eventually recapturing the city.

The dam and surrounding terrain is a key military asset because it's "critical for the isolation of Raqqa and the next step toward an annihilation of ISIS in Syria," but the dam's destruction "could lead to a severe humanitarian crisis," Scrocca warned.

US Marines equipped with artillery arrived in northern Syria earlier this month with the goal of accelerating the capabilities of the US-backed Arab and Kurdish forces there.

The Pentagon and Marine Corps declined to confirm the deployment because of security concerns in the region. They also declined to specify the exact location of the forces or how many are there.

The US believes the pressure on ISIS in Raqqa is working. A US official told reporters on March 8 that intelligence indicates some ISIS leaders and operatives continue to try to leave the city.

There is also US intelligence that indicates the city is laced with trenches, tunnels, roadside bombs and houses and buildings wired to explode, the official said. If correct, it indicates that the US has likely been able to gather intelligence from both overhead surveillance aircraft and people on the ground.

However, the official also noted that "Raqqa will probably not be the final battle against ISIS," and added that the group still has some personnel dispersed in areas south and east of the city.

ISIS could have as many as 4,000 fighters in Raqqa, according to very rough US estimates, the official said. Since November, the terror group has lost some 3,400 square kilometers around Raqqa, in a wide arc north of the city.