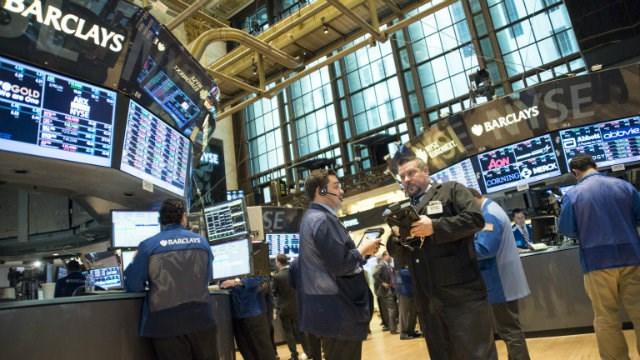 NEW YORK (CNNMoney) -- Wall Street, like the rest of America, is nervously waiting for the wild and crazy 2016 election season to finally come to a close.

U.S. stocks closed modestly higher on Tuesday as millions of voters cast their ballots to decide whether Donald Trump or Hillary Clinton will win the presidency.

The gains follow a turbulent stretch for Wall Street.

Market analysts blamed Trump's rising poll numbers for the market's first nine-day losing streak since 1980. But that trend reversed on Monday, with the Dow roaring nearly 400 points after the FBI once again cleared Clinton in the email investigation.

Monday's dramatic rally was the clearest evidence yet that Wall Street feels more comfortable with the idea of Clinton winning than Trump.

It's not a political statement. Rather, the market reaction is a reflection of investors' disdain for uncertainty -- and many fear Trump's unpredictable style and tough talk on trade would bring lots of just that.

"Obviously, stock investors and traders favor Hillary Clinton over Donald Trump because they prefer the known status quo rather than the alternative," Ed Yardeni, president of investment advisory Yardeni Research, wrote in a note on Tuesday.

The battle for the White House has also played out in the gold markets. Gold prices, which tend to go up when investors are nervous, rallied last week as Trump's odds of winning the White House seemed to improve. However, gold declined 2% on Monday and dipped 0.4% on Election Day.

No matter what the polls show, history shows that Election Day tends to be a bullish day on Wall Street. The S&P 500 has closed in the green seven of the nine times the markets were open on a presidential Election Day since 1928, according to Bespoke Investment Group. (From 1932 through 1980, the markets were closed on Election Day).

On the other hand, the immediate post-election period is often more nerve-wracking for investors. The S&P 500 has suffered an average decline of nearly 1% the day after the election, according to Bespoke. That includes plunges of 5.3% and 2.4% following President Obama's victories in 2008 and 2012, respectively.