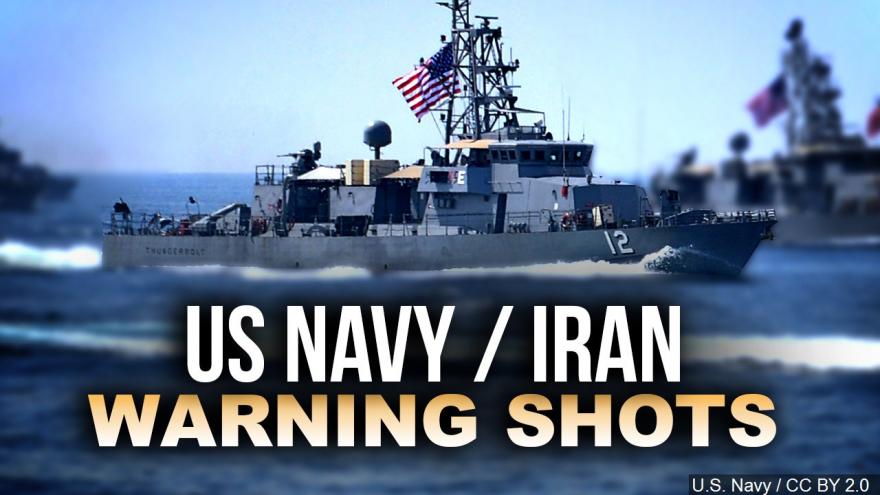 By Barbara Starr and Zachary Cohen

WASHINGTON (CNN) -- A US Navy ship fired warning shots at an armed Iranian patrol boat Tuesday in the northern end of the Persian Gulf, according to two US defense officials.

The Iranian boat is believed to have been operated by the Iranian Revolutionary Guard Corps, according to a defense official familiar with details of the incident. The officials said the Iranian boat approached and came within 150 yards of the USS Thunderbolt, a US Navy patrol ship.

The USS Thunderbolt was accompanied by the USS Vella Gulf, which is a Ticonderoga-class guided missile cruiser, and two other US Coast guard vessels at the time.

The Iranians did not respond to any warnings from the US ship, including radio calls, firing of flares and five short blasts from the US Navy ship's whistle, which is the internationally recognized communications signal for danger, the officials said.

The Navy ship then fired warning shots into the water over concerns about the possibility of a collision, one of the officials said.

The Iranian ship then ceased its provocative actions but lingered in the area for some hours, one of the officials said. There were several US Navy ships in the immediate vicinity at the time of the incident conducting routine patrol operations in international waters, according to the defense officials.

Iran's Revolutionary Guard is claiming that it "foiled the US warship's provocative move against an Iranian Navy patrol boat in the Persian Gulf," according to a statement published by Iran's official news agency IRNA.

The statement went on to say that the US warship aimed to instigate and frighten the Iranian boat by firing two warning shots.

This isn't the first time the US and Iranian navies have had a tense encounter in the Persian Gulf.

In June, the US military labeled the actions of an Iranian vessel "unsafe and unprofessional" after it trained a laser on a US helicopter that was accompanying a formation of American ships transiting the international waters of the Strait of Hormuz.

No warning shots were fired during that encounter, but US defense officials criticized the use of the Iranian laser.

In April, the US accused an Iranian Islamic Revolutionary Guard Corps ship of acting in an "unprofessional but also provocative" manner while approaching an American destroyer, the USS Mahan, while it was sailing in the Persian Gulf.

The official said the Iranian vessel had its weapons manned and came within approximately 1,000 yards of the US destroyer. The Mahan did not fire any warning shots.

However, the USS Mahan did fire warning shots in January after five Iranian vessels approached the destroyer and two other US ships that were entering the Strait of Hormuz, according to accounts from four sources.

Pentagon spokesman US Navy Capt. Jeff Davis previously told reporters that there had been 35 incidents of unsafe or unprofessional behavior by Iranian vessels in 2016, although the "vast majority" had occurred in the first half of that year.

A second US official said at the time that the number of unsafe and unprofessional encounters in 2017 was "way below" the number that had occurred by the same point in 2016.