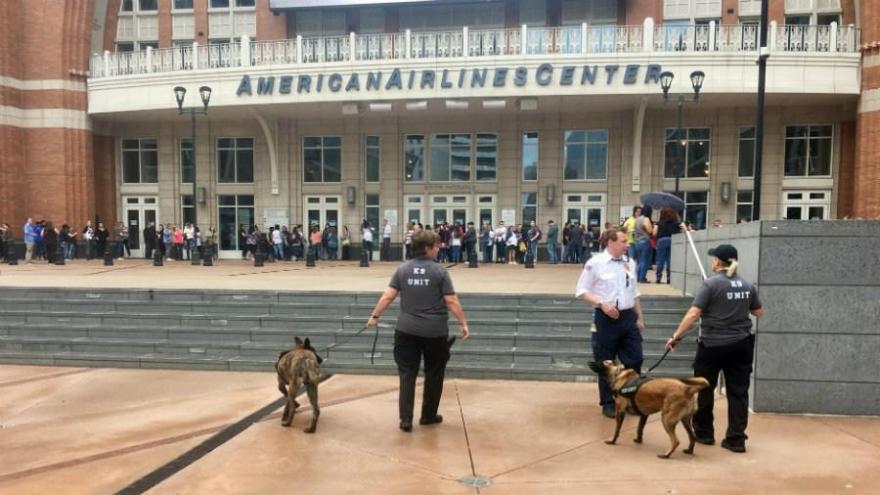 (CNN) -- If you are going to a concert or ballgame this week in the United States, you may not notice increased security -- but it will be there.

After the deadly terror attack at an Ariana Grande concert in Manchester, England on Monday, many security officials in the United States took a look at their own protocols and made revisions.

None that spoke to CNN would give specific details, but a few talked about adding officers or dogs that can sniff out explosives.

With The Weeknd scheduled to perform Tuesday night before 14,000 fans, the staff at Allstate Arena in Rosemont, Illinois, met the night beforehand.

They decided to step up the security presence outside the arena with "a few more visible uniformed Rosemont Police officers" outside the city-owned arena and marked patrol cars in the parking lot, said Pat Nagle, the arena's executive director.

The Patels, cousins from the United Kingdom, were at the show.

"It is comforting to see all of this (security) here, but you know (what happened in Manchester) always hits you in the back of your mind," said Nishul Patel, who lives now in Minneapolis. "It's funny because our parents (in London) texted us today, 'Be careful at the concert.'"

"We did get scared slightly. Didn't we? But it didn't stop us," she said.

In Dallas, where New Kids On The Block was headlining a concert, officials said they have made adjustments to their plans -- and fans said they hadn't considered skipping the show.

"We can't let terrorists win. We have to continue to go and sing and dance and have a good time," she said, adding she felt confident police would do what they need to do to protect fans.

Other fans said they hadn't changed the way they prepared for the concert, but were more mindful of their surroundings.

"It's just not going to dictate what I do and how I live and the things I do," said Jennifer Akin, a Donnie Wahlberg fan from Plano. Akin added that she thought more people are likely to speak to security if they say something that seems odd or out of place.

Fans arriving at the American Airlines Center saw two K-9 officers and their handlers on the perimeter.

There were also more officers at the Chris Brown concert in Inglewood, California, officials said. Handlers took K-9s through the parking lots, the dogs checked out each vehicle.

For Wednesday's Chainsmokers show at PNC Arena in Raleigh, North Carolina, K-9 dogs are being brought in earlier in the year than planned, CNN affiliate WNCN reported.

Officials there were in the process of taking bids from companies with explosive-sniffing dogs, but Monday's Manchester massacre prompted the call for K-9s to be on site Wednesday for the first time instead of this fall, WNCN said.

The News & Observer newspaper reported that Don Waddell, president of PNC Arena, said that a permanent vendor hasn't been worked out but "it would be foolish of us to overlook any event. So we reached out to one of our potential bidders to do Wednesday night's event."

In Houston, Police Chief Art Acevedo said his department will "up security" for Wednesday's U2 concert but reminded fans that authorities need their help.

"I always tell people at special events, treat it like you would ... a secure airport environment," he said "Anything you would feel is out of place at an airport ... when we see unattended bag or whatever, we treat that with suspicion. That should be the same way we look at things in public places ... where you see large crowds."