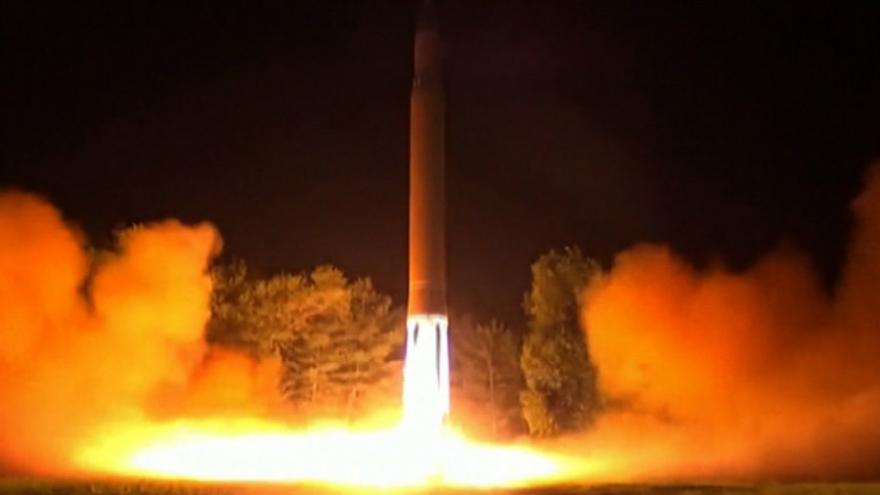 (CNN) -- North Korea tested an intercontinental ballistic missile Friday that appears to have the range to hit major US cities, experts say, and prompted a fresh round of condemnation from the United States, China, Japan and South Korea.

A combination of US, South Korean and Japanese analyses of the launch from Mupyong-ni, near North Korea's border with China, shows the missile flew about 45 minutes, going 3,700 kilometers (2,300 miles) high and for a distance of 1,000 kilometers (621 miles).

If the missile were fired on a flatter, standard trajectory, it would have major US cities like Los Angeles, Denver and Chicago well within its range, with possibly the ability to reach as far as New York and Boston, according to David Wright, a missile expert at the Union of Concerned Scientists.

However, early analysis of Friday's test cannot determine how heavy a payload the missile was carrying in its warhead, Wright said. The heavier the payload, the shorter the range.

South Korea's joint chiefs of staff said they estimate that the intercontinental ballistic missile tested Friday is more advanced than one launched earlier this month based on the range it traveled. Experts had said that test showed Pyongyang had the ability to hit Alaska.

US President Donald Trump condemned the missile launch and said the US would act to ensure its security.

"Threatening the world, these weapons and tests further isolate North Korea, weaken its economy, and deprive its people," Trump said in a written statement. "The United States will take all necessary steps to ensure the security of the American homeland and protect our allies in the region."

Kim: 'Whole US mainland' within reach

Friday's test was designed to show the Hwasong-14's maximum range with a "large-sized heavy nuclear warhead," it said, adding that Washington should regard the launch as a "grave warning."

North Korean state media was quick to tout the missile test as a success, with video and stills showing Kim Jong Un overseeing the launch and celebrating with the troops involved.

Kim is quoted as saying "the whole US mainland" is now within North Korea's reach. He called Pyongyang's weapons program "a precious asset" that cannot be reversed nor replaced, according to KCNA.

The chairman of the Joint Chiefs of Staff, Gen. Joseph F. Dunford, Jr., and the commander of US Pacific Command, Adm. Harry Harris, called the South Korean Joint Chiefs of Staff Chairman General Lee Sun Jin in the wake of North Korea's test to express the US' "ironclad commitment" to its alliance with South Korea and discuss military response options.

Hours after that call, the US and South Korean military conducted a live fire exercise as a show of force in response to the missile test, according to Pentagon spokesman Capt. Jeff Davis. The exercise included firing missiles into the ocean.

If North Korea's claims about Friday's test are true, Pyongyang may be even further advanced in its missile program than was previously thought. Earlier in the week, a US official told CNN that the US believed that North Korea would be able to launch a reliable nuclear-capable intercontinental ballistic missile by early 2018.

However, the official clarified to CNN that while North Korea can currently get a missile "off the ground," there are still a lot of undetermined variables about guidance, reentry and the ability to hit a specific target.

US Secretary of State Rex Tillerson said China and Russia need to do more to stop North Korea's missile program.

"As the principal economic enablers of North Korea's nuclear weapon and ballistic missile development program, China and Russia bear unique and special responsibility for this growing threat to regional and global stability," Tillerson said in a statement.

Michael Elleman of the International Institute for Strategic Studies estimated a range of at least 9,500 km (5,900 miles) for the missile, according to Reuters news agency -- less than that estimated by Wright, but still potentially putting Los Angeles within reach.

"The key here is that North Korea has a second successful test in less than one month," he said. "If this trend holds, they could establish an acceptably reliable ICBM before year's end."

2017 has been a year of rapid progress for North Korea's missile program.

Pyongyang has carried out 12 missile tests since February and conducted its first-ever test of an ICBM on July 4 -- which it claims could reach "anywhere in the world."

"North Korea is slowly morphing into a nuclear and missile power right before our very eyes," said Harry J. Kazianis, director of defense studies at the Center for the National Interest and an expert on North Korea.

"North Korea will continue to test over and over again its missile technology and nuclear weapons in the months and years to come in order to develop the most lethal systems it can," Kazianis said. "You can bet every time they do tensions will continue to rise. This is what makes the situation on the Korean Peninsula as dangerous as it is."

Less than six years into his reign, Kim Jong Un has tested more missiles than his father and grandfather combined.

His country's latest test has spurred calls for a response from the Trump administration.

"North Korea's latest missile test shows the Trump administration's actions are not changing North Korea's behavior and it's time for the President to articulate a comprehensive strategy to the American people -- so far he's failed to do that," Democratic Rep. Ted Lieu told CNN on Friday.

Trump administration officials have warned that "all options are on the table" but a clear path forward has yet to materialize.

Doug Bandow, a senior fellow at the Cato Institute who specializes in foreign policy, told CNN that North Korea's missile launch shows its leaders are "absolutely committed to their missile programs" and not interested in tempering their activities.

Bandow, who visited North Korea just last month, said the regime is convinced that developing its missile program as a nuclear deterrent is absolutely necessary. This, he said, is a mindset that continues to put pressure on Trump, who finds himself in a situation with no good choices.