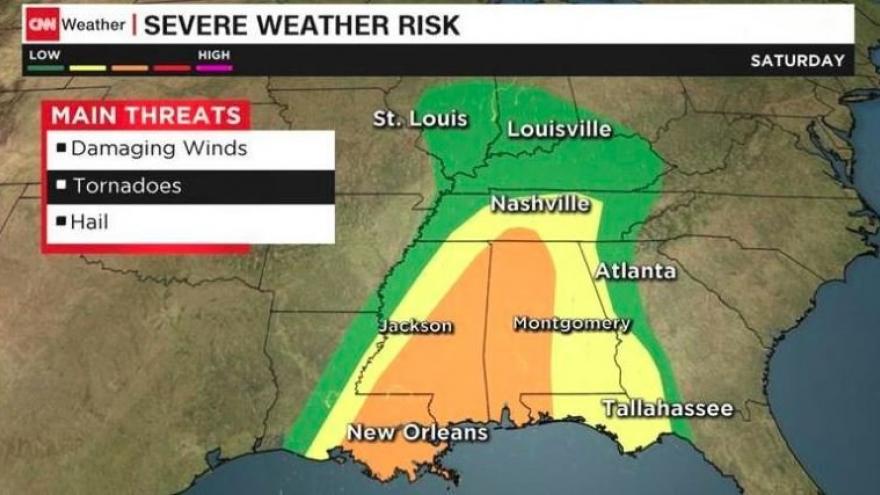 (CNN) -- Harsh weather systems are unleashing three sets of menacing conditions Saturday: thunderstorms and tornado risks in the South, more wildfire danger in Oklahoma and the southern Plains, and a blizzard in the upper Plains and Upper Midwest.

Severe storms already made their mark in western Arkansas, where a tornado flattened several homes Friday in Mountainburg, the town's mayor told CNN. A National Weather Service survey Friday in Mountain Home, Arkansas, showed that straight-line winds reached up to 85 miles per hour in the area, according to CNN affiliate KFSM-TV.

Tornadoes were also a possibility Saturday in parts of the South, where severe storms dumped heavy rain. But the threat for the region had diminished by Saturday evening, according to CNN meteorologist Gene Norman, with the severe storm system mainly confined to southern Alabama.

More than 4 inches of rain was possible in some parts of the South over the weekend.

Mountainburg Mayor Neal Moon told CNN several homes and mobile homes were "completely gone" after Friday's tornado in his town, and many others sustained extensive damage. The tornado hit the elementary school, Moon said, but no children were there at the time.

Details about injuries, if any, weren't immediately available.

Joshua Brown posted a video of the storm on Twitter, saying, "I think we just drove through rotation in Mountainburg. Saw the wall cloud, saw the rotation. This video does not do it justice cause it formed really quickly."

Meanwhile, the risk of wildfires in Oklahoma -- where blazes already have consumed more than 350,000 acres and forced some towns to evacuate -- and parts of the Southwest and southern Plains remains high.

Strong winds -- including gusts of 40 to 50 mph -- and dry conditions meant parts of Texas and Oklahoma were at extreme risk for wildfires Saturday.

Wildfires have been burning for a few days in parts of Oklahoma, leaving at least one man dead.

The largest blaze was in Oklahoma's Dewey County, which had burned more than 240,000 acres by Saturday morning and was only 3% contained, according to Oklahoma Forestry Services.

Evacuations had been ordered in the Dewey County towns of Vici, Seiling, Taloga and Putnam -- communities with combined populations of nearly 2,000 people -- officials said.

Gov. Mary Fallin announced a state of emergency for 52 of the state's 77 counties because of wildfire and drought conditions.

"I'm asking all Oklahomans to be vigilant and careful, and to do their part to prevent fires," Fallin said in a statement Friday. "Anything that can be done to minimize fires will help to keep both our firefighters and the public safe."

Yes, this weekend marks the middle of April. And yes, heavy snow is still in the forecast for the northern Plains and Upper Midwest.

Frigid air is filtering south from Canada, and where that air meets moisture, we are seeing blasts of April snow.

Some parts of the northern Plains have picked up 1 to 2 feet of snow since Thursday. And blizzard warnings -- forecasting heavy snow and strong winds combining for whiteout conditions -- were in place Saturday in parts of Kansas, Nebraska, South Dakota and Minnesota.

Parts of the northern Plains and the Upper Midwest could receive 8 inches to 2 feet of snow through the weekend.

Snow continued in the Great Lakes region Saturday night, causing highway closures in Minnesota and accidents in Wisconsin. Bitter cold was descending into the Plains and Midwest, causing temperatures to run 15 to 20 degrees below normal, Norman said.

The Minneapolis-St. Paul International Airport said via Twitter it was temporarily suspending flights Saturday to include those taking off and landing because of a "lack of visibility and fast rate of snowfall."

The snow has also had an affect on sports. Saturday's Major League Baseball game featuring the Detroit Tigers at home playing the New York Yankees was postponed because of weather. Sunday's game featuring the Minnesota Twins at home against the Chicago White Sox was also postponed.