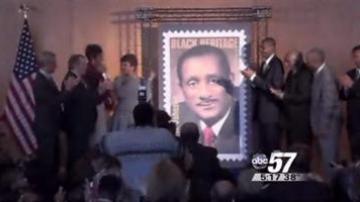 This year the postal service's Black Heritage Forever stamp features a photo of John H. Johnson. He's the man behind Ebony, Jet and other magazines.

In 1982 he became the first African American named to Forbes list of the Top 400 "WEALTHIEST" People in America.

Johnson died in 2005 at the age 87. The stamp is on sale at post offices nationwide.