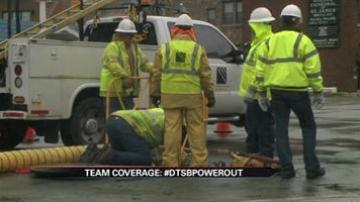 SOUTH BEND, Ind. -- Indiana Michigan Power says they expect the power to be restored to downtown South Bend by noon on Sunday. A fire underground caused the outage.

"We're just trying to figure out what the damage is," said Mark Robinson of Indiana Michigan Power.

Indiana Michigan Power spent most of Friday morning removing charred wiring and equipment from the vault that went up in flames.

Utility crews are working on assessing the situation, getting the system back up and determining a cause.

"We're doing everything we can to get your power back on," said Robinson.

More than 800 customers were affected, but thousands more will feel the impact of the outage.

This weekend is one of the busiest weekends for the city with several Michiana colleges hosting graduation ceremonies.

"We welcome all those who are coming into the city," said South Bend City Council President Oliver Davis.

City leaders say they're committed to making the best of a bad situation.

Dozens of workers have been trucked in from Fort Wayne and Columbus, Ohio to help speed up the process.

Representatives from the power company said the system has had issues in the past, but wouldn't go into detail on what exactly those issues were.

Four out of five downtown manhole vaults were de-energized to prevent another fire from occurring.