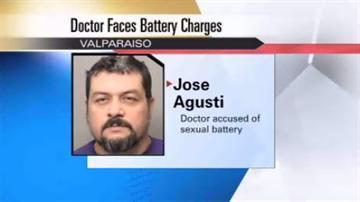 A female patient said the doctor, Jose Agusti, assaulted her on two occasions at his office.

The AP reports that 45-year-old Agusti of Chicago was taken into custody and charged with two counts of sexual battery.

After the alleged victim went to police the first time, police sent her back with a hidden camera and microphone.