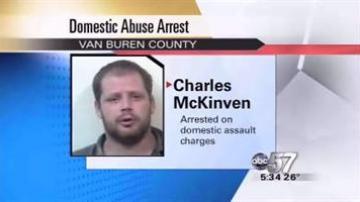 VAN BUREN COUNTY, Mich. -- A man is behind bars after officers say he choked a woman and threatened her with a knife.

Police chased down 31-year-old Charles McKinven into the woods near a home on 70th Street in Bangor Township in Van Buren County Saturday.

After a massive and lengthy track, the suspect was found and armed with three knives.

The suspect is in jail for domestic assault, and investigators say it's not his first offense.