Vandals cause thousands of dollars in damage at Goshen park 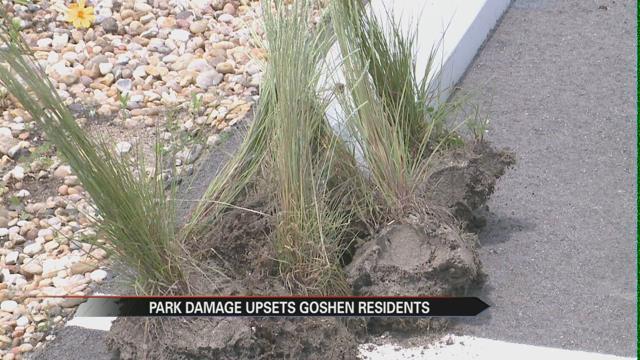 The Goshen Parks and Recreation Department says vandals are causing thousands of dollars in damage to the new Rock Run Park on Prospect Avenue.

Crews with the Parks and Recreation Department say they normally find rocks scattered about and plants pulled up from the roots but damage is becoming more severe.

The department filed a police report when they found extensive damage. Now they are asking neighbors to help stop the vandalism.

“This is what we call a pebble heart and people just drop stones in here,” says Richard Kindel, Maintenance Director for the Goshen Parks and Recreation Department.

Kindel says the vandals damaged instruments in the music room.

“You can notice that the areas that are sort of disturbed, those are areas where vandals had destroyed the music instruments,” says Kindel.
Kindel says ever since the park opened on April 15th crews have been finding broken facilities and disturbed scenery each and every morning.
“It did cost money and to keep it nice and useful we need to take care of it,” says Marlene Hooton, a nearby resident.

Hooton played a role in the initial planning of the park and was surprised to hear that damage, like damaged bathrooms and broken trees, adds up to about $8,000 to $10,000.

“It's really sad – I did notice the park department guys and they were doing something over there by the rocks so I don't know if the pipe got broken,” says Hooton.

A water pump that fills an interactive rock pond for children was broken.

“Staff puts a lot of time in and they are really proud of what they do because they see the accomplishment and they know it's helping the community, it's helping the children and so to come back and see something torn up is disheartening,” says Kindel.

Security cameras for this park are too costly for the department and Kindel asks that the community come together and help keep this place nice for everyone to use.

If you see anything suspicious the Parks and Recreation Department says call them or police.