Vehicles as weapons: New York City crash is part of a deadly trend 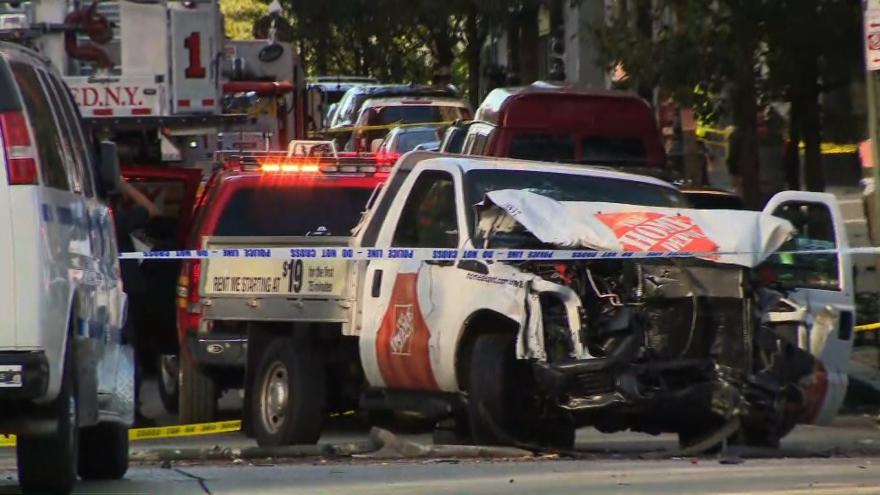 (CNN) -- Once again, a driver has plowed into a crowd of innocent pedestrians, turning a car into a lethal weapon.

This time, it was in New York's lower Manhattan, where the driver of a rental truck drove down a busy bicycle path near the World Trade Center. The city joins a list of cities worldwide that have fallen victim to a growing trend.

Here's a look at some recent similar attacks and the possible motives behind them:

Number of casualties: At least eight people were killed and about a dozen were injured, authorities said.

What happened: The driver of a rental truck hopped a curb and drove down the bicycle path on the west side of West Side Highway in Lower Manhattan near the World Trade Center. After crashing the truck into a school bus, the suspect exited the vehicle while displaying imitation firearms and was shot in the abdomen by a police officer, according to the New York Police Department.

The suspect was identified by two law enforcement sources familiar with the investigation as 29-year-old Sayfullo Habibullaevic Saipov. He is from the central Asian nation of Uzbekistan and came to the United States in 2010, sources told CNN.

Officials said police took Saipov to a hospital for treatment, where he underwent surgery, according to a person familiar with the investigation.

Before his surgery, law enforcement was able to talk to him, the source said. It is not known if he told them anything.

Why it happened: While the cause is unknown, the incident is being investigated as terrorism, officials said. Authorities found a note in the truck allegedly used in the attack claiming the suspect did it in the name of ISIS, a senior law enforcement official told CNN. The note was in English, the source said.

Additionally, witnesses reported the suspect was yelling "Allahu Akbar," according to four law enforcement sources. The FBI's Joint Terrorism Task Force is taking over the lead of the investigation.

Number of casualties: At least 13 people were killed and more than 100 were injured, authorities said.

What happened: A van plowed into crowds on the Barcelona thoroughfare of Las Ramblas, a popular stretch filled with cafes, bars and street performers.

Why it happened: Spanish Prime Minister Mariano Rajoy labeled the Barcelona attack "jihadi terrorism." The ISIS media wing, Amaq, has said the Barcelona attackers were "soldiers of the Islamic State" but stopped short of explicitly claiming responsibility for the attacks or providing evidence for their claims.

Number of casualties: A 32-year-old woman was killed and 19 people were injured.

What happened: A gray Dodge Challenger rammed into the back of a silver convertible on a narrow side street crowded with anti-racism counterprotesters in downtown Charlottesville. The Dodge driver slammed the car in reverse, going back up the street at a high rate of speed, dragging its front bumper.

The attack took place as rallies drew white nationalists and right-wing activists from across the country to the progressive college town.

Why it happened: Authorities have not announced a motive, but the suspect, James Alex Fields Jr., faces charges including second-degree murder. Investigators have not said whether they believe it was an act of terrorism.

Fields' mother told The Toledo Blade that she knew her son was going to an "alt-right" rally, but said she was stunned to learn he is suspected in a deadly attack.

Number of casualties: Eight people were killed and more than 40 were wounded.

What happened: Three men drove a van into pedestrians on London Bridge before going on a stabbing rampage at bars at nearby Borough Market. They were shot dead by police.

Inside the van, police found two blowtorches as well as what appeared to be 13 Molotov cocktails. The van also had office chairs and a suitcase. Police believe the attackers told relatives they were using it to move.

Why it happened: Police named the attackers as Khuram Shazad Butt, 27; Rachid Redouane, 30; and Youssef Zaghba, 22.

Butt is believed to have associated with the outlawed radical Islamist group al-Muhajiroun, co-founded by notorious hate preacher Anjem Choudary. Counterterrorism sources told CNN that Butt was considered a potential threat to British security and was still under active investigation at the time he carried out the deadly assault.

In a raid of an east London apartment rented by Redouane, police found an English-language copy of the Koran opened at a page describing martyrdom and materials that may have been used to make the Molotov cocktails.

ISIS claimed responsibility for the attack, although the group provided no evidence for its involvement or details of the attack.

What happened: A stolen beer truck barreled into pedestrians on a busy shopping street in the center of the Swedish capital before it plowed into a department store. Sweden stepped up its security. National counterterrorism, bomb and air assets also provided support.

Why it happened: The attacker, Rakhmat Akilov, had shown sympathies to extremist groups, including ISIS, Swedish police said. Akilov, 39, was from the central Asian republic of Uzbekistan. He admitted to carrying out a "terrorist crime," his lawyer said.

Number of casualties: Eighty-four people were killed and more than 200 wounded.

"All signs show he is a supporter of the Islamic State," Netanyahu said. "We know there is a sequence of terror attacks, and it's quite possible that there is a connection between them, from France, Berlin and now Jerusalem."