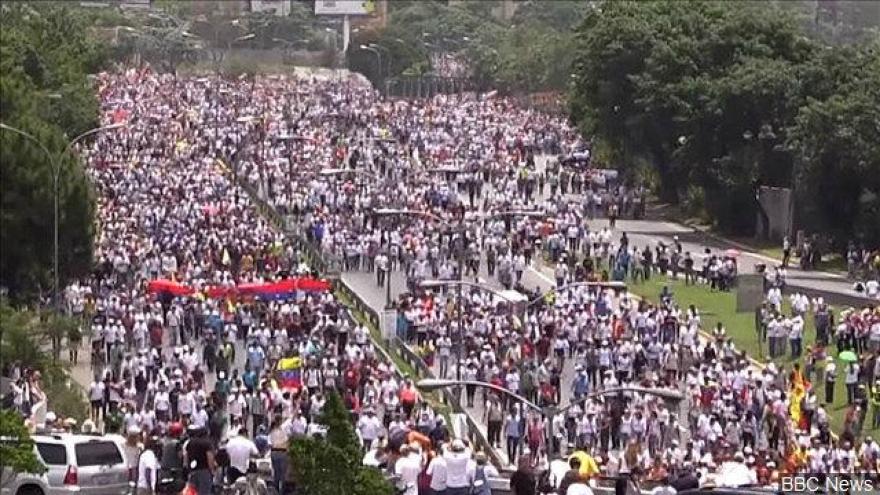 (CNN) -- After weeks of violent protests that left at least 22 people dead, Venezuelans will take to the streets Saturday dressed in white to pay tribute to those killed in anti-government demonstrations this month.

The peaceful demonstrations planned nationwide come after at least 13 people were killed in one day in the capital of Caracas.

Nine of the victims were electrocuted as they tried to loot a bakery Thursday during chaotic anti-government protests in Caracas, according to the nation's minister for communication.

Three others were fatally shot and an additional death was reported in the city, but details were not immediately available.

Six people also suffered gunshot wounds as several other businesses, including two liquor stores, were looted and attacks were reported in the city's metro system, he said.

The death toll from incidents related to the protests this month has jumped to at least 22 people.

Within the first two weeks of April, six people were killed during anti-government protests. Three others were killed Wednesday in a series of protests described by opposition leaders as the "mother of all marches."

Violent clashes between supporters of the opposition and President Nicolas Maduro have hit Venezuela this month. The opposition is asking Maduro to step down, accusing him of eroding democracy.

On March 29, the Venezuelan Supreme Court dissolved the parliament and transferred all legislative powers to itself. The court's decision was eventually reversed, but protests against Maduro had already began.

Tensions have risen as Maduro has called protesters "vandals and terrorists," and security forces used cannons and tear gas canisters.

The Human Rights Foundation released a statement condemning the killings.

"The democratic world must stand firm in support of the young men and women in Venezuela who are risking their lives for freedom and democracy by rejecting Nicolas Maduro's dictatorship," said Thor Halvorssen, president of the Human Rights Foundation.