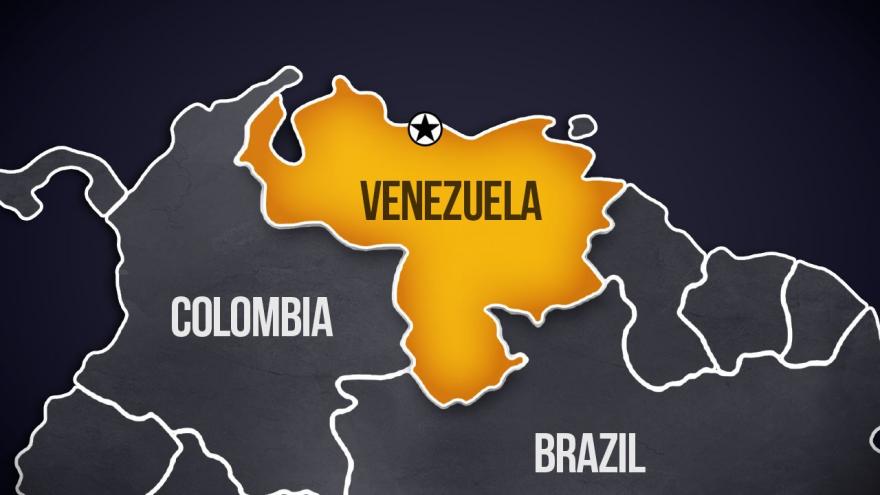 (CNN) -- Venezuela remained a powder keg on Sunday as authorities said they had quelled an anti-government paramilitary attack at a military base that led to the deaths of two people, and the country's attorney general defied her ouster by the newly elected National Constituent Assembly.

A man who identified himself as an army officer announced the revolt on social media, an action he called a "legitimate rebellion" aimed at the government of leftist President Nicolás Maduro.

"We are united now, more than ever, with the brave people of Venezuela who do not recognize the legitimacy of Nicolás Maduro's murderous tyranny," according to a man who said he was Capt. Juan Caguaripano.

The President, speaking on his weekly TV show, "Sundays with Maduro," made reference to the incident, saying "a week ago, we won with votes and today we had to beat terrorism with bullets."

"They attack with terrorism and hate. We attack with our work, our love. They destruct, we construct," he said.

Sunday's incident came amid daily anxiety in the South American nation, where the economic hardship and bloody political turmoil that had roiled the country for months came to a head last week when the Constituent Assembly was voted into office, taking the place of the opposition-led National Assembly.

Authorities said the early-morning rebellion, which took place at a military base in Valencia, about 150 kilometers (95 miles) west of Caracas, was swiftly contained.

Defense Minister Vladimir Padrino said the attack was carried out by "delinquent civilians wearing military uniforms" in the early morning hours of Sunday, an act he labeled a "terrorist attack of a paramilitary nature."

Maduro said there were 10 attackers. "Two were killed "by shots fired by those who are loyal to our nation. One is injured. Out of these 10 attackers ... nine are civilians and only one is lieutenant who deserted his post months ago."

Venezuelan Minister of Communications Ernesto Villegas said seven people have been detained in the "mercenary attack."

The man speaking in the video who identified himself as Caguaripano was with a dozen others, people he identified as soldiers from the 41st Brigade of Fort Paramacay in the city of Valencia. "I am joined here by officers and troops from this glorious unit who represent the real Venezuelan army, that has fought to forge our liberty," Caguaripano said in a video on social media.

The move, Caguaripano said in the video, was not a "coup."

"It is a civic and military action meant to reestablish the constitutional order and, more importantly, to save the country from its total destruction and to keep our young people and families from being murdered," he said.

But Padrino said Caguaripano was a "first lieutenant who had deserted his post," and those involved in the attack had been "repelled immediately."

Privately-owned online news channel Vivo Play broadcast video from outside the Fort Paramacay showing tanks moving inside the base and helicopters surrounding it. There were news images in Valencia of a barricade set by anti-government activists in flames.

They barred her from ever seeking public office again in Venezuela, prohibited her from leaving the country and froze her assets.

Her removal from office happened after she said she would open an investigation into fraud allegations surrounding last Sunday's election.

But Ortega, speaking Sunday at Caracas' Universidad Católica Andrés Bello, sloughed off the exercise. "I will continue being the attorney general of this country," she told reporters.

Ortega called the election illegal and scolded the Maduro government.

"I thought they had principles, ethics and values," she said.

The new assembly has wide-ranging powers and is expected to rewrite the Venezuelan Constitution at Maduro's behest.

Maduro's loyal supporters buoyantly cast votes for new members last Sunday. Staunch opposition supporters, who see the vote as a power grab and an erosion of democracy, boycotted the vote and staged demonstrations against the development.

The firing defied the regional Organization of American States, whose human rights commission Saturday warned the Venezuelan government to guarantee Ortega's safety and allow her to continue as attorney general.

South America's trade bloc, Mercosur, decided to suspend Venezuela indefinitely from the group until there was a "re-establishment of democratic order." The Organization of American States applauded that decision. Mercosur's decision is mostly symbolic and will not impact trade or the free movement of Venezuelans among Mercosur countries.

The US Treasury Department issued sanctions in July against Saab and 12 other Maduro loyalists.

The assembly has proposed a "restructuring" of the attorney general's office and nominated Tarek William Saab, a Maduro ally and former ombudsman, to be the interim attorney general. He was sworn in late Saturday afternoon to a rousing applause from the Constituent Assembly.