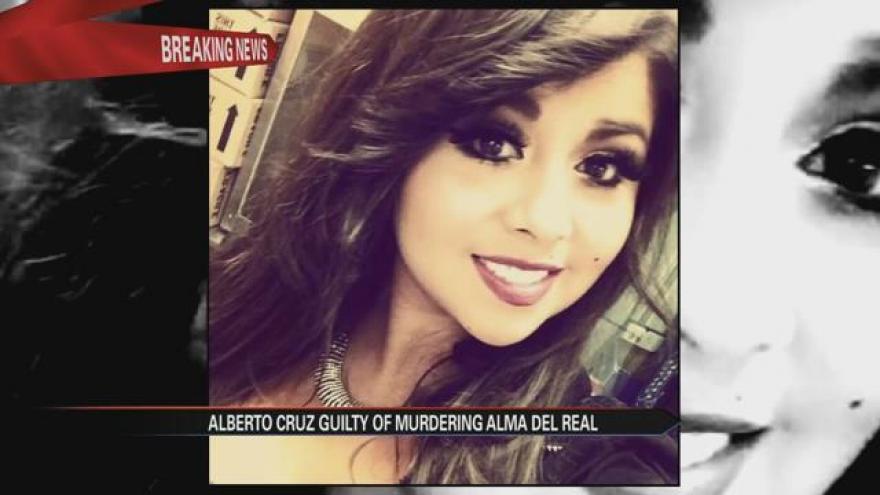 A verdict was reached in the trial of Alberto Cruz, who was charged in the murder of Alma Del Real in April 2015.

Thursday was the final day of testimony in Cruz's trial.

Cruz took the stand in his own defense to explain what happened to Alma Del Real in April 2015.

The story Cruz told on the stand was different from the other versions he told police.

Cruz told police that night he and Alma had sex, then when he was getting ready to leave, she hit him.

Cruz said he punched her twice and pushed her. When she fell, she hit her head on the floor and was knocked unconscious.

He said he then dumped her body in a field in Marshall County.

Cruz cried on the stand when he was called a coward for not calling police.

The defense says a series of events led to Alma's death, that Cruz did not murder her.

The defense rested Thursday morning and both the state and defense presented their closing arguments.

The prosecution's argument was that Cruz's multiple stories didn't add up. They said he raped her, strangled her, then dumped her body like a piece of trash.

The defense says it is reckless homicide because Cruz didn't intend to kill her.

The jury began deliberations around 1:30 p.m. They returned with a verdict around 3 p.m.

The case could have gone differently because Alma's body wasn't discovered for six weeks.

"There’s a loss of evidence there that would have been great to have but the circumstantial evidence and the defendant’s comments, the things that he said and did, I think, filled the void for the jury and helped them to reach their verdict," said deputy prosecutor Christopher Fronk.

"The defendant removed any possible vestige of doubt that might have been there," said Fronk.

Alma's family was pleased with the verdict.

"We knew this was the verdict. It was just the justice system placing all that and making it official," said Alma's aunt, Susana Lagunas. "We already knew that he was guilty, he had killed her."

Cruz will be sentenced June 17.