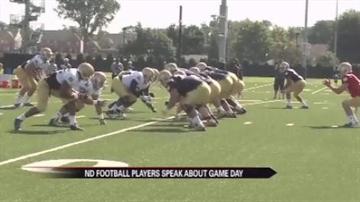 NOTRE DAME, Ind.-- Fall camp is over and the Irish say they have practiced long enough. It's game time.

“It’s been a long camp. We’re getting tired of hitting each other and we’re ready to hit somebody else,” Irish running back George Atkinson III said.

In three days, Atkinson III will get his wish. That's when the Owls of Temple University come to town.

The team veterans say they are ready for their chance to shine.

“The fact that I get to be back out on the field with my teammates, my friends, it’s something that a lot of people don’t get to say. I’m just trying to have fun with it. That was the main thing last season, I’m just trying to carry it into this season,” Irish wide reciever DaVaris Daniels said.

“I’m excited, especially the fact that I played last year I know what to expect, I know what game day feels like now, so I’m really excited to play against someone else with a different jersey,” Irish cornerback KeiVarae Russell said.

Those different jerseys are the Temple Owls. A team that struggled last year with only four wins and seven losses. The Irish say last year doesn't matter. They are going to prepare for Temple just like anyone else.

“We’re just working on today and worried about tomorrow’s practice, so I just have to bring the same mentality,” Irish wide reciever Chris Brown said.