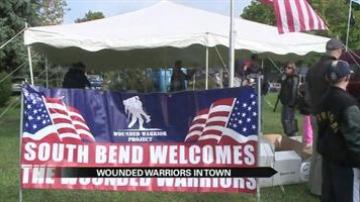 SOUTH BEND, Ind.-- Some of our country’s heroes are spending their weekend right here in Michiana as part of the Wounded Warrior Project.

The Wounded Warrior Project is a program that works with veterans who have suffered from burns, amputations, traumatic brain injury, post traumatic stress disorder, and other wounds coming from war.

They served our country and now Michiana has the opportunity to serve them.

Local police and firefighters escorted the veterans to Notre Dame Saturday morning so they could tailgate and go to the game.

Ian Lennon said, “I was in Kuwait in 2003 and there was an explosion on the truck that I was fueling.”

Lennon said he is happy to be alive and cheer on Notre Dame.

Lennon said, “It’s pretty cool because we all tell war stories and joke around and make fun of each other and just have a good time!”

Mathew Bowman was injured in Afghanistan in 2011 when he stepped on an IED and lost both of his legs.

“It’s definitely overwhelming, the support we get from communities all over the country and the escort here is tremendous,” Bowman said.

The wounded warriors are staying at local firehouses across Michiana and on Sunday the group will have mass at Notre Dame's basilica.