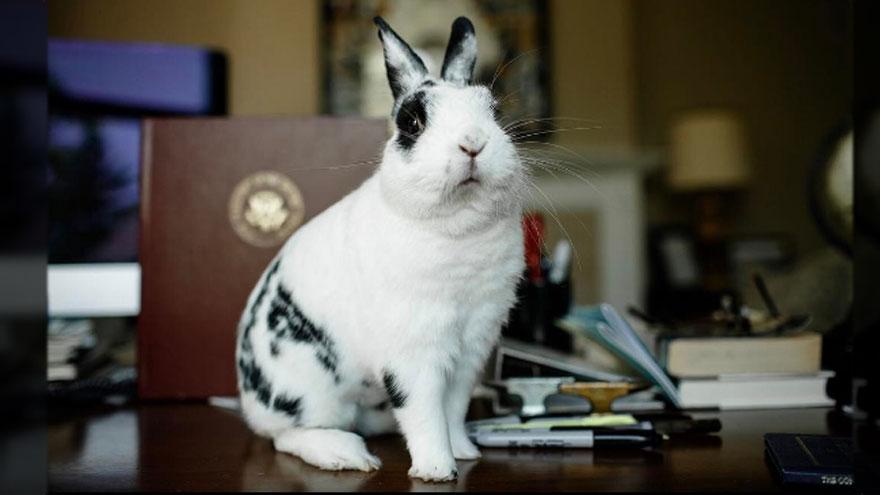 (CNN) -- The precocious pet rabbit of the vice president of the United States is hopping into a book deal.

Marlon Bundo, the Pence family rabbit with his own Instagram account, announced Friday that he is the star of a new book.

"Marlon Bundo's 'A Day in the Life of the Vice President,' " due out March 19, will chronicle the BOTUS' (Bunny of the United States) day alongside "Grampa" Mike Pence.

"In the book, I follow Grampa around all day, as a BOTUS should, while he goes about his duties as Vice President!" an Instagram post from the first rabbit read.

The book was written by the vice president's daughter, Charlotte Pence, with watercolor illustrations by second lady Karen Pence, an award-winning artist.

"Marlon has become a national celebrity!" a press release for the book reads.

A portion of the proceeds will benefit A21, an organization focused on combating human trafficking, and two art therapy programs, a key aspect of the second lady's platform.

Marlon Bundo lives alongside the vice president and second lady and a veritable menagerie at the Naval Observatory.

When the Pences traveled from Indiana to Washington days before the inauguration, they disembarked with cats Pickle and Oreo, plus rabbit Marlon Bundo. In the absence of a pet in the first family, Bundo has become an icon in the rabbit world.

Days before the election, the family lost their beloved 13-year-old beloved beagle, Maverick.

"Rest in peace Oreo. You touched a lot of hearts in your little life," Karen Pence tweeted alongside photos of the black and white cat. "Our family will miss you very much."

But Marlon Bundo and Pickle weren't the only pets for long; one week later, the vice president, second lady, and daughter, Charlotte, traveled to their home state of Indiana, where kitten Hazel and Australian shepherd puppy Harley joined the brood.

No word yet on whether the bunny will go on a book tour.