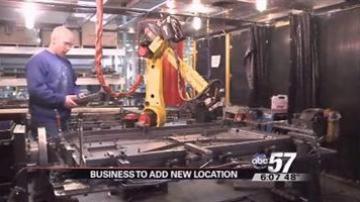 BUCHANAN, Mich. - A Southwest Michigan manufacturer is expanding into Buchanan and jobs are likely to follow.

Vickers Engineering, a metal parts manufacturer based out of New Troy, announced plans Monday to fill the vacant Bosche plant on Third Street. Twenty employees from the facility in New Troy have relocated to the facility.

The company needed the expansion. “We’re actually turning away more work than we’re accepting at this point,” said Matt Tyler, CEO and President of Vickers.

Tyler said they’ve hired more than 50 of the 160 employees at the company in just the past year. He said the Buchanan expansion is the “tip of the iceberg.”

Tyler said the company will likely add jobs but is being careful while it grows. “We’re turning away work because we’re being selective, we can only grow so fast with our capital and employee infrastructure,” he said.

“We’re quite pleased,” said Bill Marx, Buchanan’s City Manager. Not only is an empty building getting filled, the potential to replace lost jobs is exciting. “We’ve got momentum,” he said. “We’re taking baby steps but we’ve got momentum and Vickers coming in helps support that.”

“There’s a lot of work,” said Tyler. Not only is he seeing the economy expand but manufacturing jobs are coming back the U.S. and Vickers is one of the benefactors. “Our next step remains to be seen but we think it’s sooner rather than later.”

Tyler did not disclose the number of jobs Vickers hopes to create.