Victim of a hate crime? Now there's an app for that

If you are the victim of a hate crime, now there\'s a mobile app for that. The Council on American-Islamic Relations launched a new civil rights app called \"Making Democracy Work for Everyone.\" Photo courtesy CAIR 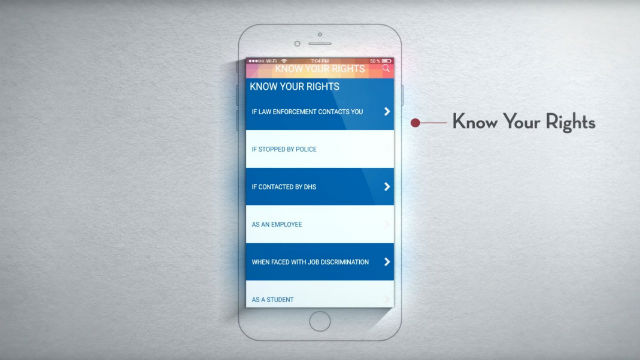 (CNN) -- If you are the victim of a hate crime, what would you do? Who would you call? What are the laws in your city or state that could protect you?

Now there's a mobile app for that.

The Council on American-Islamic Relations launched a new civil rights app this week called "Making Democracy Work for Everyone." It allows users to quickly report bias incidents they experience, "an important feature during a period of increased hate incidents targeting American Muslims and other minority groups," says a CAIR press release.

"It has been on the back burner for some time. It's development got accelerated though with the election of Donald Trump," CAIR spokesman Ibrahim Hooper tells CNN.

"It's on a daily basis now that we are issuing a statement about some hate crime somewhere in the country, some days multiple incidents," he said. "One of the reasons we wanted to make the app is because that's how so many young people access the world, they feel more comfortable using an app than making a phone call sometimes."

CAIR is hoping that an easier reporting process will make the number of incidents reported closer to the number that actually occur.

"A lot of these incidents go unreported so anything we can do to make it easier to report, we want to do," Hooper said.

All minority groups can use the app

The app's launch comes a week after a Muslim teen was attacked and killed near a Virginia Mosque. Nabra Hassanen was beaten with a bat after a road rage accident, and while it is not officially classified a hate crime, thousands have signed a petition calling on state and federal officials to investigate the youth's death as a hate crime.

There has been an unprecedented spike in hate crimes targeting Muslims and other minority groups since the election of President Trump, according to CAIR National Executive Director Nihad Awad.

This app isn't just for Muslim's though, Hooper said.

"Anybody can report," he said. "That's one thing we've noticed -- it's not just Muslim-Americans who are experiencing more hate incidents, it's all groups of minorities."

Anyone who reports an incident will be helped either through CAIR or in conjunction with other organizations, according to Hooper.

Hate crimes are rising not just against Muslims but all groups, according to the FBI, which has been tracking hate crime statistics since 1990.

CAIR's free "Making Democracy work for Everyone" app not only allows users to report the incidents, it also offers advice on what your constitutional rights are when you are contacted by law enforcement, Homeland Security, or other officials.

There is advice on the app on where to go when facing discrimination in the workplace or school. Other features include a news feed with articles relevant to the American Muslim community, along with polls on social and political issues.

It can be used to get advice in real time situations too, said CAIR civil rights attorney Gadeir Abbas.

"Lets say you are traveling and get detained at Customs, you can use this app to get information about your rights or contact someone who will be able to help you," Abbas said. The app is available in Android and iOS.

This is not the first civil rights' mobile application.

In 2012 the Sikh Coalition developed a mobile app that allowed users to report incidents of airport profiling and make official complaints to the Transportation Security Administration (TSA) and the Department of Homeland Security (DHS).