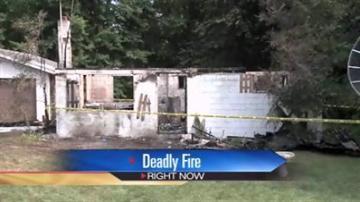 BUCHANAN, Mich. -- One person was killed in a house fire in Buchanan Thursday morning.

The fire was in the 1800 block of West Wagner, near the intersection of Wagner and Cleveland, in Weesaw Township.

Fire crews arrived around 5:30 a.m. Thursday. They could tell the fire had been burning a while.

"When we pulled up the house was already fully engulfed; the roof had caved in on the structure already," said Chief Jack Hojara of the Weesaw Township Fire Department.

It was difficult for the firefighters because they know the woman who lives in the home.

"That's the hard part of the job; you know somebody's in there but it gets to a point where there's really nothing you can do other than put the fire out and then go from there," said Hojara.

It's not the first time they've been to the house.

"We had been out here about 2 or 3 years ago on a call and we knew that the lady who lived here was pretty much a shut in. She didn't get out very much," said Hojara.

After the fire was out, firefighters began searching through the debris, hoping the woman wasn't home.

"With the intense heat and the smoke and stuff like that; the chances of surviving a fire like this, inside a dwelling, is probably zero," said Hojara.

Sadly, that was the case today.

"There was a couch and a chair in the living room and they pretty much said that if we are going to find her in there, that's where we would find her. And that's exactly where we did find her," said Hojara.

The victim was tentatively identified as 86-year-old Helen Ott. She was less than a week away from her 87th birthday.

Her son had stopped by on Wednesday to check on her.

The house was a total loss.